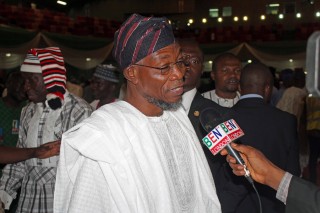 As many rightly predicted, President Muhammadu Buhari has agreed to bailout bankrupt Nigerian states—which have been unable to pay the wages of public workers in the past few months—after approving a N713.7 billion ($3.5 billion) relief fund.

The fund is part of a three-pronged relief package. Of the total sum, N413.7 billion ($2.1 billion)—sourced from LNG sales proceeds—is recognised as a special intervention fund, made available to pay outstanding wage commitments. The remaining N300 billion ($1.4 billion) is a soft loan to states. The soft loan will be provided by the Central Bank of Nigeria (CBN).

As of mid-June, it was reported that about 10 of the 36 Nigerian states—Osun, Rivers, Oyo, Ekiti, Kwara, Kogi, Ondo, Plateau, Benue, and Bauchi—owed workers salaries, some of whom have not been paid for the past 10 months. The combined outstanding wage bills of the broke states was placed at N110 billion. The new fund is expected to boost purchasing power of Nigerians, particularly the average and low-income earners, and to reflate the economy in a period where government revenues have been battered by the global oil crisis, and local fuel scarcity is raising the daily cost of living.

Those who have branded the governors running bankrupt states as incompetent, have remained critical of the move by the President to bailout the needy states. “It is unfortunate that governors, most of whom operate flamboyantly and mismanaged their states’ resources are begging for bailout,” said Dr Kayode Ajulo, the National Secretary of the Labour Party, a Nigerian political party.

While it has become a necessity to provide relief for unpaid workers, Dr Kayode advised that there must be new measures put in place to ensure the habit of mismanagement does not reoccur. “I say this knowing the antics of some of our governors as we should not be surprised that some of them may commit the money to another white elephant project or buy private jets which is the latest vogue among them. Greece was given conditions when she asked for bail out from the European Union and I see nothing wrong in setting a condition for the bail out as there must be an end to the prevalence of financial indiscipline  among our state executive.”

Pat Utomi, a political economy expert, believes the intervention is key to reviving the drowning Nigerian economy. “It is important to recognize that without such bailout, the economy will be in danger as there will be no spending going on while those offering services will be unable to offer anything. The bailout is very important for the economy.” He however shares Dr Kayode’s sentiment on employing stringent measures to curb mismanagement. “This development should now make government impose conditionality that will stop mismanagement and unnecessary spendings”.

#Buhari said #PDP drained the treasury, even at that, he can give N400billion bailout for states, hope #Greece won’t be envious of #Nigeria.