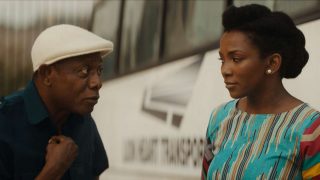 Nigeria’s first Oscar entry gets ruled out amidst language controversy

‘Lion heart’-Nigeria’s first submission to the Academy Awards for Best International Feature Film was disqualified has been disqualified for having “too much” dialogue in English.

Prior to the announcement of qualifying films on October 7, the Oscars Academy executives had not vetted the movie.

Upon revision, The Academy of Motion Picture Arts and Sciences maintained that Lion Heart which doubles as Nigeria’s first original Netflix movie, did not have a predominant non-English dialogue track.

The 95-minute drama film about a Nigerian woman and the challenges she encountered in keeping her family’s transportation business was part of 10 African films to enter this year’s Award.

The Wrap reported that the disqualification was communicated via email to Oscar voters. Inevitably dropping the figure from 93 to 92 countries contention for this year’s Best International Feature Film Award.

“English is the official language of Nigeria,” foremost Hollywood director Ava DuVernay said in a tweet. She further questioned the criteria for the award in a statement saying “Are you barring this country from ever competing for an Oscar in its official language?”

Genevieve Nnaji, director and star of Lion Heart in a response to Ava’s tweet said the movie “represents the way we speak as Nigerians. This includes English which acts as a bridge between the 500+ languages spoken in our country.” She went on to say that Nigeria did not colonize itself and strongly asserts that the movie is “proudly Nigerian.”

NOSC Chairperson, Chineze Anyaene, said that the “Nigerian film industry is often faced with producing films with wide reach.” This often makes the recording dialogue predominantly English with non-English infusions in some cases.

NOSC Chairperson revealed that the committee will henceforth organize workshops, seminars, and use other available media to create awareness on the guidelines and requirements for the International Feature Film Entry.

Although disqualified from The Best International Feature Film category, Lion Heart is still eligible for consideration in other Oscar categories like: Best picture, writing, cinematography, amongst others.