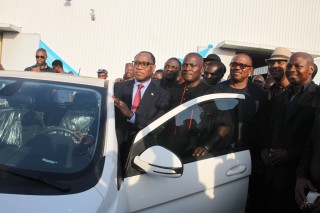 Before 2013, Nigeria was Africa’s biggest market for tokunbos—the local name used to describe used cars shipped from Europe and the US. Vehicles (mostly five to 10 years old) were brought into the country through the Lagos seaport, or smuggled through the border it shares with Benin Republic. What fuelled this massive dumping, however, was that the local manufacturing (or assembling) industry was virtually grounded, and investing in a new car was pretty expensive for the average Nigerian.

During the mid and late 90s, Nigeria’s roads were littered with Peugeot-branded sedans built in the Peugeot Automobile Nigeria (PAN) factory located in Kaduna, one of the busiest commercial cities in Northern Nigeria. But as the second millennium drew closer, those cars were gradually replaced by used Mercedes Benz 300 (popularly known as V-Boot), BMW’s 3,5, and 7 series, and the Madza 626’s and 323’s. This eventually led to the demise of PAN, and many other car producers within the country.

In an attempt to reverse the trend, Nigeria launched the National Automotive Policy, an initiative to promote massive investments in affordable made-in-Nigeria cars and limit excessive importation, in October 2013. It was also aimed at trimming the growing importation bill for cars, which stood at $3.4 billion as of 2012. To discourage importation, the government doubled the then tariff regime for wholly-imported vehicles, from 35 percent to 70 percent, while it offered foreign manufacturers, willing to carry out a significant portion of their production value-chain locally, tax breaks.

Since the policy was effected in July 2014, Nigeria has been swamped with foreign manufacturers. This week, Honda, the world’s eighth largest automobile maker, confirmed that it has started building cars in Nigeria by retooling a part of its factory that previously made motorcycles. It plans to produce 1,000 of its Accord sedans annually at the plant, as well as make Nigeria its production base for Africa.

German automaker Volkswagen is also set to resume production in Nigeria after a 25-year absence. Volkswagen, the second largest car maker globally, will partner with Dubai-based distribution group, Stallion, to grow its business locally. Toyota, the world’s largest car manufacturer, is also teaming up with Elizade, its local distributor, to develop a local assembly plant. Toyota currently sells about 18,000 to 20,000 vehicles in Nigeria annually.

Nissan, however, is already a step ahead of the bunch. As of October last year, it had unveiled the first set of SUVs assembled in its Lagos-based assembly plant, and has since added the Almera sedan and NP300 pickups to its locally produced fleet. KIA and Hyndai, amongst others, are also keen to participate in a market that is becoming more attractive by the day.

Beyond the foreign attraction, the local industry is also seeing a rapid revival. The previously grounded PAN is set to resume production as the PSA/Peugeot-Citroen is expected to start assembling Peugeot 301 sedans in its Kaduna facility before 2016.

70 percent of the parts used in building the cars were locally sourced, heralding the emergence of a local car manufacturing industry that will, in the nearest future, serve the African market. Already, the company has disclosed it plans to take its brand to neighbours in West Africa, with the Republic of Benin and Ghana on its radar. The company had earlier impressed with its trucks and buses.

The range of Innoson vehicles is already enjoying patronage locally, unlike in the past when indigenous manufacturers were stifled by the lack of appreciation of their products. Across Africa, locally-made goods are beginning to earn respect and desired patronage through quality assurance and competitive pricing.

When the new auto policy was initially drummed up two years ago, many Nigerians—particularly those within the low and middle income bracket—criticized the move to restrict importation of used cars, as new cars were considered too costly.

But the new movers have silenced such sentiments by producing vehicles that are fairly priced. The new Innoson IVM Umu is expected to sell for about N1.5 million to N2 million, a similar going rate for an imported tokunbo Toyota Corolla (2008).

Nigeria still remains one of the biggest markets for tokunbo cars within the continent, but its quest to rid itself of that title is landing it a new one—the new hub for Africa’s auto manufacturing.