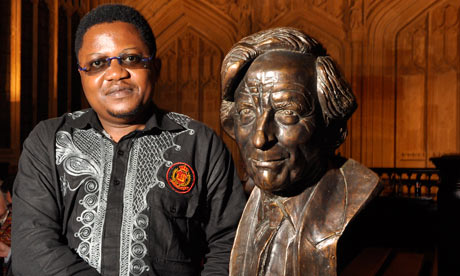 Nigerian author, Babatunde Rotimi has emerged the winner of the 2012 Caine Prize for African Writing. The author won the price for his short story- Bombay Republic – which tells the story of a Nigeria soldier fighting in Burma campaign of World War II and returning home as a veteran with a strong sense of new opportunities.

The story exposes the exploitative nature of colonialism and the psychology behind the fight for independence.

The Caine Prize for African Writing was instituted in 2000 to honour the memory of Sir Micheal Caine, the chairman of the Booker Prize for nearly 25 years.

As the 2012 Winner of the 13th Caine Prize for African Writing, the Bombay Republic writer was awarded the sum of £10,000 ($16,000). Babatunde will be given the opportunity of taking up a month’s residence at Georgetown University, as a Writer-in-Residence at the Lannan Center for Poetics and Social Practice.

He will also be invited to take part in the Open Book Festival in Cape Town in September 2012 and events hosted by the Museum of African Art in New York in November 2012.

Babatunde is also a winner of the Meridian Tragic Love Story Competition organized by BBC World Service. He was awarded the Cyprian Ekwensi Prize for Short Stories by the Abuja Writers Forum.

His plays have been staged and presented by institutions which include the Halcyon Theatre, Chicago the Swedish National Touring Theatre; the Royal Court Theatre in London and the Institute for Contemporary Arts. He is currently taking part in a collaboratively produced piece at the Royal Court and the Young Vic as part of World Stages for a World City.

While announcing the winner of the award at a dinner held Monday evening at the Bodleian Library in Oxford, the chair of the panel of Judges, Bernardine Evaristo, MBE, award-winning author of six books of fiction and verse fiction, described Babatunde’s work as “ambitious, darkly humorous and in soaring, scorching prose exposes the exploitative nature of the colonial project and the psychology of Independence.”

Evaristo who is also a literary critic and a creative writing lecturer at Brunel University describes the entries as “truly diverse fiction from a truly diverse continent.” He said the prize shortlist reflected “the range of African fiction beyond the more stereotypical narratives.”