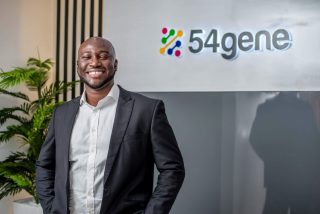 54gene, the African genomics research, services, and development company has been named in Fast Company’s annual list of the World’s Most Innovative Companies for 2020, the company said in a press release this week.

The list honours businesses making the most profound impact on both industry and culture, showcasing a variety of ways to thrive in today’s fast-changing world. 54gene, a company that uses human genetic data from African populations to improve the development of medical products, appears on this year’s edition, which features 434 businesses from 39 countries, including Snap, Microsoft, Tesla, Spotify, and Canva.

“This accolade recognises our efforts to use robust data from Africa to advance global healthcare discoveries… The fact that the industry has recognised our innovative approach to solving global health challenges, as well as the impact we are having on the continent, is a tremendous honour,” said Founder and CEO Dr Abasi Ene-Obong. For 54gene, a company launched just last year, receiving the recognition from Fast Company at such an early stage of its journey is an honour, he said.

Backed by international investors, 54gene aims to facilitate new drug and diagnostics discoveries that are more impactful for Africans and the wider global population. “Africans have the most varied genetic profile in the world, yet, less than 3 percent of genomic data used in pharmaceutical research comes from the African continent,” Ene-Obong adds. “To be frank, the global pharmaceutical market will not advance without the inclusion of African DNA in global research.”

As part of its goal to improve the collective knowledge of genes, 54gene recently launched an African centre to facilitate translational genomics research by the region’s scientists, Ventures Africa reported last month. The center, meant to facilitate precision medicine across continental Africa, will be funding its first study under the Non-Communicable Diseases – Genetic Heritage Study (NCD-GHS) Consortium.

Meanwhile, the World’s Most Innovative Companies is Fast Company’s signature franchise and one of its most highly anticipated editorial efforts of the year. It provides both a snapshot and a roadmap for the future of innovation across the most dynamic sectors of the economy.

“At a time of increasing global volatility, this year’s list showcases the resilience and optimism of businesses across the world. These companies are applying creativity to solve challenges within their industries and far beyond,” said Fast Company senior editor Amy Farley, who oversaw the issue with deputy editor David Lidsky.

Fast Company’s Most Innovative Companies issue (March/April 2020) is now available online, as well as in-app form via iTunes and on newsstands beginning March 17, 2020.