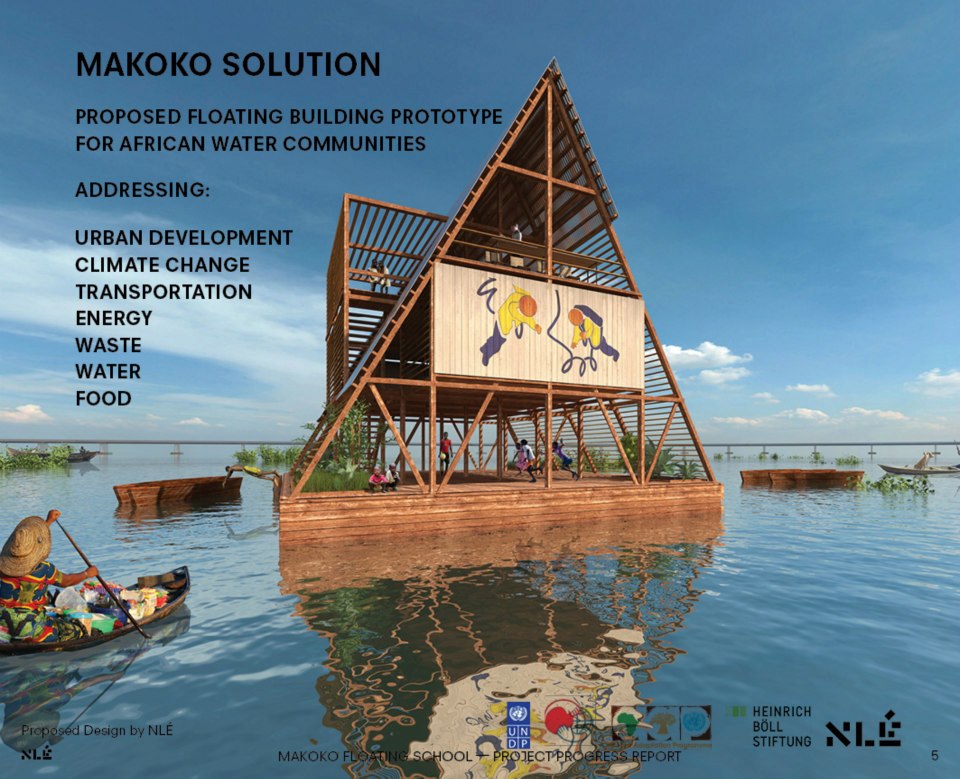 They are poor, almost forgotten fishermen. In fact, they were not officially counted as part of Nigeria’s 2007 census, but the ingenuity of one man has brought the shantytown of Makoko, a fishing community in Lagos, into the spotlight, with the construction of a floating school, a structure that has now been nominated for the Design Museum’s Design of the Year award.

76 designs from different parts of the world were nominated for the awards organised by Design Museum, world’s leading museum devoted to architecture and design. . Winners of the awards will be announced in June, according to a statement by the organisers.

“2014’s nominees include international design stars such as Zaha Hadid, John Pawson, Stephen Jones, David Chipperfield and Miuccia Prada, alongside crowd-funded start-ups and student projects. All of the nominated designs go on display at the Design Museum, in an exhibition open from 26 March to 25 August 2014,” according to Jenny Stewart, Design Museum’s Press Manager.

Buoyed on 256 empty plastic barrels, the three-storey triangular structure was built with locally-sourced materials and labour, although Kunle used the help of Dutch naval architect, Erik Wassen in designing the masterpiece which has been nominated in the architecture category of the Designs of the Year award at the Design Museum in London.

Whoever dubbed the Nigerian sprawling slum the Venice of Africa apparently thought of just one similarity, the lagoon, and probably its stench. While Venice has become a global tourist destination, anyone going to Makoko today will be there to see only one thing; it’s the floating school.

Nigerian-born architect Kunle Adeyemi like many other artistic minds visited Makoko in 2009 and he was inspired to make Makoko a city which will have several floating structures with better access to portable water, sanitation and waste disposal. Kunle and his firm NLE would develop Makoko, but it will start with a prototype, improving on the main primary school that served the slum.

Fishing and trading are the occupations of the majority in Makoko, and most of them have known no other life than water. Kunle believes the question anyone should be asking since we already know their way of life is “how do you improve that condition, how do you address the challenges of living on water in a safe, healthy and environmentally sound way?”

“The key thing is that we have developed a prototype of building and architecture on water using local materials and local resources and available technology,” Kunle told AFP.

Students of the school can float and play, as there is a playground on the ground floor, an enclosed classroom area in the middle and workshop space on the top floor. The school, which can take 100 students, has started its first academic session as it opened at the beginning of Nigeria’s 2013/2014 school years.

The project, which was supported by the UN Development Fund, the Nigerian government and the Heinrich Boell Foundation, relies on solar panels on the roof for electricity, and would maintain clean toilets by rainwater harvesting.

Makoko’s economy drives itself as the government sees the settlement as illegal—little or nothing goes to Makoko from the Lagos State government, not even security. Area boys that would easily be called hoodlums in other climes are the ones securing the lives and property of the people of Makoko.

“‘The floating school has been illegal since its inception,” Lagos State Commissioner for Waterfront and Infrastructure Development, Prince Adesegun Oniru, who justified the state government’s stance, was quoted as saying by Architectural Review.

“It was erected without permission of the state … it shouldn’t be there.”

Kunle Adeyemi is still in talks with the Lagos State government, who apparently do not share his altruistic vision, to ensure the dream of ‘a Makoko like the tourist city of Venice’ does not die under the government’s demolition fury.

Poverty-stricken, with frequent strikes of malaria and cholera, Makoko has however been given a glimmer of hope.

The arts changed Venice, brought it into world reckoning and gave it a place in UNESCO’s World Heritage Sites list. It is hoped that the future of Makoko will also be secured in the arts, which has brought it to the world stage.

Kunle Adeyemi’s dream remains big for Makoko, with the successful completion of the school spurring him on, the architect believes homes, hospitals, restaurants, and movie theatres can in the same manner float too.

“It is really just a structure that could actually be used for different forms of uses,” AFP TV quoted Kunle as saying.

The Nigerian architect will be hoping to win in London later in the year, as his architectural masterpiece competes with 76 other great designs.