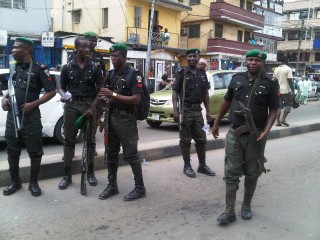 Torture is a lucrative business for the Nigerian police – Amnesty International

“A police unit created to protect the people has instead become a danger to society, torturing its victims with complete impunity while fomenting a toxic climate of fear and corruption.” – Damian Ugwu, Researcher for Amnesty International

A recent report by Amnesty International (AI) details a pattern of “ruthless human rights violations” by the Special Anti-Robbery Squad (SARS) of the Nigerian Police Force. SARS was set up as a special unit of the police force to tackle robbery and violent crimes, but instead, they have become the perpetrators of violent crimes and other corrupt practices.

In the report by AI, Nigerians gave narratives of vile experiences in the hands of men who were empowered to serve and protect them. From starvation, hangings, and shootings, to beatings and mock executions, SARS employ various means of torture to get their victims who are often innocent citizens to make a confession or pay a bribe to be released.

Damian Ugwu, Nigeria’s researcher for AI said, “Our research has uncovered a pattern of ruthless human rights violations where victims are arrested and tortured until they either make a ‘confession’ or pay officers a bribe to be released … SARS officers are getting rich through their brutality. In Nigeria, it seems that torture is a lucrative business.”

According to the report, SARS detainees are held in different locations across the country including an infamous detention centre in the capital city of Abuja known as the ‘Abattoir’, where AI found 130 detainees in overcrowded cells.

The human rights organisation has also received reports from lawyers, journalists, and human rights defenders on the nefarious activities of SARS. And also collected testimonies from victims and their family members revealing that SARS officers do not only demand bribes, they also steal and extort money.

A 25-year-old fuel attendant in the city of Onitsha, Anambra state recounted his ordeal with SARS after his employer accused him of being responsible for a burglary at their business premises.  “The policemen asked me to sign a plain sheet. When I signed it, they told me I have signed my death warrant. They left me hanging on a suspended iron rod. My body ceased to function. I lost consciousness. When I was about to die they took me down and poured water on me to revive me.”

Chidi Oluchi, another victim of SARS’ brutality said, “They told me to slap myself and, when I refused, they started beating me with the side of their machetes and heavy sticks. My mouth was bleeding and my vision became blurred.” The officers extorted the sum of N25, 500 from Chidi as payment for his freedom.

Amnesty International is not the first to report on the unit’s brutality. In 2014, Nigerian newspaper, Vanguard, gave a similar report on SARS. In an article titled REVEALED! What goes on inside SARS walls, investigations by the Network On Police Reforms In Nigeria (NOPRIN) exposed shocking atrocities perpetrated by the special unit force, and how politicians and people of influence use them as a tool for victimisation, oppression and injustice.

In the article, one Justin Nwankwo gave an account of his experience in the “torture chamber” of SARS, “Some policemen started by asking me questions ranging from personal to family and academic background.  One of them shouted, “Mr. tell us what happened or I will shoot your two legs … Ropes were tied on both hands and legs, then bent (backwards) and tied together with a rod passing in between them and then elevated to a perimeter wall.” Nwankwo said the picture of a goat being barbequed is the closest description to what he was put through. “At the turn of each question and non-compliance, a bag of sand is added on my back for increased pain,” he said.

Most of SARS’ detainees are denied access to a lawyer, doctor, or family member during detention. And the few who are bold enough to seek justice against SARS after their release never get attended to. When confronted on the rampant activities of human rights violation within the police, the authorities deny vehemently. The report also stated that repeated calls on the Nigerian justice system to prevent or punish torture have been ignored. “This lack of accountability breeds and perpetuates impunity, creating an environment where SARS officers believe they have carte blanche to carry out acts of torture,” said Ugwu.

These atrocities committed by the Nigerian police force is responsible for the attitude of disrespect and contempt collectively shared by Nigerians towards members of the country’s civil, and security forces. Nigerians rarely speak well of police officers or soldiers as they are generally regarded as corrupt, trigger-happy, power-drunk, and oppressors of civil society. “Police torture is a stain on Nigerian society that must be addressed with clear orders to law enforcement officers not to inflict torture or other ill-treatment on detainees under any circumstances,” Ugwu said.