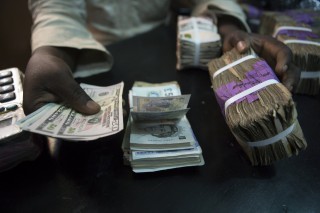 Commercial banks in Nigeria are reducing international spending limits by their customers abroad amid the country’s fragile currency situation, caused by the coronavirus pandemic and a drop in international oil prices.

Guaranty Trust Bank has reduced how much foreign currency its customers can spend abroad from $3,000 to $1,500 or $500 according to media reports, while Zenith Bank cut the limit to $1,000 from $3,000. Providus Bank, a relatively new player in the local banking sector, also said it was restricting limits to $1,000 per month.

The move to curb dollar purchases is seen as a precautionary, considering banks may be experiencing a shortage of foreign currency available for them to sell to their customers due to the falling foreign exchange earnings. Analysts expect Nigeria’s external reserves, which were about $36.3 billion as of February, to fall below $30 billion by September.

In reaction to a sharp decline in the country’s foreign reserve triggered by the oil price crash, the Central Bank earlier this month devalued the Naira and scrapped the multiple exchange rate system, adopting a uniform rate at the official, Bureau De Change as well as importers and exporters windows.

But the recent ‘adjustment’ of the local unit could be the first round of currency depreciation expected in 2020, analysts have warned, as the Naira comes under pressure due to huge import demand. Compounding the situation are capital outflows emerging markets like Nigeria are experiencing as foreign investors pull out in favor of safe investment options amid the pandemic.

A prolonged oil price crash could see external reserves decline by as much as $1 billion monthly over the next 6 months, according to analysts at Renaissance Capital. But the extent of the decline depends on the success of the import restriction policy by the central bank, they said. In addition to the banks’ restriction of dollar sales to customers, the CBN is thought to have also limited Forex sales to BDCs.

But a curb on dollar sales could have damaging effects on the economy, as seen during the oil price crash of 2016 when the central bank introduced controls to reduce dollar demand, prompting many lenders to either cut or suspend foreign payments for customers. The restricted access to dollars left businesses unable to import raw materials and individuals unable to meet dollar expenses.

In this situation, however, the adverse effects could be partly offset by a decline in demand as a result of the lockdown. Regardless, experts have often criticized the Forex restriction policy, calling on the government to come up with policies and incentives to attract foreign investment, rather than restrict access to foreign exchange.