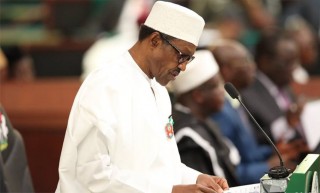 Nigeria’s government has said it will review the 2020 budget for necessary adjustments to revenue forecasts and sources, as oil revenue comes under pressure due to a dent on demand caused by the new coronavirus.

The international oil benchmark – Brent crude – has been on a downward trend since the virus broke out in China, collapsing by a third this year. The oil price reached almost $69 per barrel in January, before the virus outbreak that has now spread to over 91 countries, after which it plunged to around $50 a barrel last week and just over $46 on Friday.

Meanwhile, Nigeria’s budget for the year was benchmarked on an oil price assumption of $57 a barrel while crude oil sales were expected to contribute 35 percent of government revenue.

But as European and Chinese refiners cut demand due to tight margins and lower economic activity, coupled with low demand from heavy industry and airlines, West Africa’s top oil producers are currently struggling to find buyers for the commodity. Up to 70 percent of April futures cargoes from Angola and Nigeria are yet to find buyers even as millions of barrels slated for export in March remain unsold, reports say.

“We think a mix of lower demand and lower price may be forcing the finance ministry to rethink its revenue strategy for the year,” Nigeria-based CSL Stockbrokers said in an article published on Nairametrics.

Nigeria, Africa’s biggest economy and the region’s largest oil producer, is heavily dependent on oil with the resource bringing in as much as 90 percent of government revenue. But the government has in recent times moved to reduce the dependence through a string of policies, most notably the new aggressive tax policies introduced under the Finance Act 2019.

“We think the Federal Government has very limited alternatives to cover any shortfall from oil revenue,” the stockbroker adds, suggesting an increase in the planned debt finance raise via Eurobonds as the “easiest alternative” for raising the needed revenue. “We think the low-interest-rate environment would help the Federal government raise cheap debt.”

Hopes that deepened production cuts by the Organization of Petroleum Exporting Countries and its allies (OPEC+) could help lift oil prices were dashed on Friday after the oil cartel failed to reach a deal to steady the market.

Following the collapse of talks between the world’s largest oil-producing nations, global oil prices plunged to the lowest levels in about three years. Brent fell by more than 7 percent to $46.31 a barrel, the lowest price since July 2017.

OPEC’s proposal was to cut output by 1 million barrels a day while its partners, led by Russia, would add cuts of 500,000 barrels. But the group ended three days of negotiations in Vienna without a deal after Moscow disagreed with the plans for deepest oil production cuts since the 2008 global financial crisis.

Members could now pump as much oil as they like from April 1 this year, Russian energy minister, Alexander Novak said. Meanwhile, major oil traders have warned that OPEC’s failure could lead to one of the most severe oil price crises in history. They say prices could head into a free-fall, even as low as $45 a barrel, if the body fails to take action without Russia’s support.