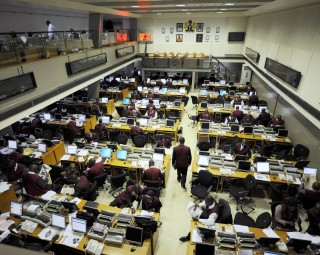 Here is why the Nigeria stock market lost N2.2 trillion in 6 months

Here are a few of the reasons why the Nigerian stock exchange market lost N2.2 trillion since May 29.

In September, JP Morgan Chase & Co decided to remove Nigeria from its local currency emerging market bond index. As a result of this, the All Share Index (ASI) crumbled under heavy sell-offs, which were largely driven by panic in the market due to this announcement by JP Morgan. In just four days, investors lost over N160 billion.

Delay in the appointment of ministers by President Muhammadu Buhari

After being sworn in as the president in May, Muhammadu Buhari delayed in appointing his ministers until November. This lack of clarity from the new administration had a detrimental impact on economic growth as it discouraged investment and financial influx into the country.

According to the Nigerian Bureau of statistics, growth in disposable income grew at a slower rate in the second quarter of 2015 as a result of the anti-corruption stance of the Buhari-led administration. This also affected cash flow which led to the reduction in the sale of stocks.

The CBN, with the support of the government, has issued stringent policies, which have contributed to the decline in Foreign Portfolio Investments (FPI) into the country. The October FPI report of the Nigerian stock market, revealed that foreign transactions dropped by about 65 percent when compared to October 2014. This is as a result of significant reductions in foreign participation during this period. Market watchers said the decline in the participation of foreign portfolio investors in transactions on the floor of the Nigerian Stock Exchange may continue till the first quarter of next year in view of the rising macroeconomic risks and regulatory crackdown on some listed companies.