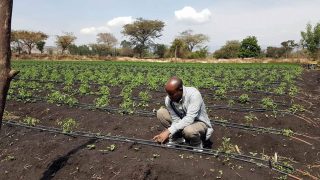 At a three-day workshop with industry stakeholders on Tuesday September 22, Nigeria’s Minister of Agriculture, Sabo Nanono, expressed optimism that the country would stop the importation of fertilizers by 2023.

The three-day workshop titled, “The Operationalisation of the National Fertiliser Quality Control Act 2019,” was focused on filling the gap in the production of quality fertilizers in the country, and protecting private investments of manufacturers, blenders or distributors as well as other service providers along the fertiliser value chain.

Speaking at the event, the minister said that the country has over 33 fertiliser blending plants and is currently producing about five million metric tonnes (MT) of fertilizer annually, with many more underway. According to the Food and Agriculture Organisation (FAO) estimate, the country requires about seven million MT of fertilizer annually. And with the current output, the government had to grant waivers to some fertiliser plants to import the product.

However, Nanono said that the country has created an enabling environment for private sector investors through the Fertiliser Act, which is focused on ensuring that the country actualizes its goal of ending importation of fertilizers in the next two years.

The law was developed by Prof. Yemi Akinseye-George as a government instrument for ensuring that private operators (blenders and manufacturers) produce quality fertilizers and increase agricultural productivity for national food security. It is also focused at eliminating the cases of fertiliser sharp practices across the country in the areas of nutrient deficiencies, adulteration, and misleading claims.

More so, the Act allows private sector players obtain certificates of registration or sales permits, after payment of some prescribed fees/charges, before being allowed to operate any fertiliser business in Nigeria. That should not be a problem as the fees are the least when compared to other related-sub-sectors and agencies, and the ECOWAS sub-region, stakeholders say.

The new law also gives the Farm Input Support Department of the Federal Ministry of Agriculture and Rural Development, the right to implement the Act, and strips the power to regulate the sub-sector from the National Agency for Food and Drug Administration Control (NAFDAC).

Agriculture remains one of the largest sectors in the Nigerian economy and employs two-thirds of the entire labour force. The use of fertilizers is an important part of the sector that cannot be ignored, which makes local production of fertilizers beneficial to both the farmers and the government.

Sufficient local production output could make the commodity available at affordable prices for farmers, while helping to improve yields and income as well as shore up foreign exchange reserves.