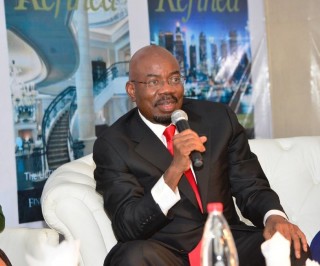 Founder and Chairman, Zenith Bank, Jim Ovia who was present at Fine and Country’s Refined Investor Series last Friday, spoke on various issues including how investment can drive growth in Nigeria’s real estate sector. According to him, the sector needs financing, which will in turn drive more growth especially for the low income earners.

While addressing the state of housing deficit in Nigeria, Mr. Ovia said the issue is mostly related to housing for the low income earners in Nigeria which make up the bulk of country’s population. He indicated that regardless of the many commercial and residential properties in places like Ikoyi, Lekki and Victoria Island, several of them are still empty due to the high cost, with many low income earners living and working in an already saturated Lagos mainland.

According to him, in developed cities, there are provisions made for the low income earners that are suitable for their own pockets, citing that there are owner occupier 20-year mortgages for drivers, messengers and others in 20 to 40 storey buildings. He advocated that the structure of the nation’s economy needs to be reorganized so that low income earners can have their own skyscrapers consisting one-bedroom spaces which will be affordable for them.

While addressing the issue of return on investment on real estate management in Nigeria, Mr. Ovia, the developer of Civic Towers, said the Civic Towers project is a profit initiative, which marks the new era of iconic structures in Lagos as well as world-class and avant-garde commercial buildings complete with state of the art technology. Mr. Ovia also said iconic structures were put up because they are driven by ego. However, in a place like Nigeria, profit and functionality comes before ego, this is driven true by the fact that atop Civic Towers, sits a communication tower, used in mobile, television and radio communications.

For example, the traffic congestion Ovia referred to is apparent at Law School, Victoria Island – Ajah axis, along the Lekki-Epe expressway in Lagos state, which should take about 30 minutes but takes as much as two to three hours.

According to the Guardian Nigeria, motorists have called for an expansion of the road due to the fact that the traffic situation is getting worse with each passing day. The last time regular users of the route lamented the situation and called on the government for help was last month when several commuters blamed the daily traffic jam on the presence of roundabouts as well as the motor-parks along the route which hinder free flow of traffic.

The number of roundabouts along Lekki-Epe expressway from Victoria Island to Ajah is 9 and the distance from one end to the other is just 21 kilometres which should take about 30 minutes travelling distance but tends to be longer due to heavy traffic.

However, Mr. Funmi Osifuye from the Lagos State Ministry of Physical Planning and Urban Development, who was also present at the Refined Investor Series, said the state government is committed to further expansion of the Lekki expressway and also intend to build a fourth, fifth, sixth and seventh bridge along the Ikorodu road.

Osifuye also outlined a light rail project for the Lekki expressway as well as an airport near Epe worker’s city before the Lekki free trade zone and plans for a community sewage treatment as opposed to individual sewage systems as some of the plans outlined by the ministry in line with directive from the state government.