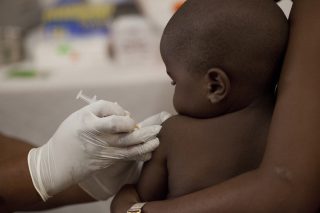 Nigeria launches campaign to vaccinate 28 million children in the north

The Nigerian government through the National Primary Health Care Development Agency (NPHCDA) and the World Health Organization (WHO), with the support from Gavi- The Vaccine Alliance, has launched a large-scale campaign to vaccinate 28 million children in 19 northern states.

The campaign is focused on boosting the immunity of children against measles and meningitis especially as report cases concerning these two diseases are on the steady rise amongst children in the north.

Between 1 and 31 August 2019, 1336 suspected measles cases were reported from all 36 states of the country with 58 percent coming from northern states such as Katsina, Borno, Yobe, Sokoto, and Kaduna amongst others.

Northern states are also known to be the predominant meningitis belt in Nigeria which has resulted in the death of more than 500 children under the age of five. The federal government, therefore, seeks to ensure that no child dies from these vaccine-preventable diseases through its campaign.