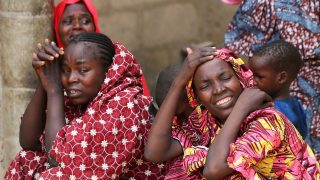 Nigeria is the 9th most dangerous country for women

Ending all forms of violence and discrimination against women and girls before 2030 is a target of the 5th Global Goal, from 17, set by the United Nations in 2015 for Sustainable Development around the world. However, achieving this goal just became harder as a new survey shows that some countries are literally more dangerous for women than before. It almost appears as though the danger had been hidden for a long time.

Based on parameters such as healthcare, discrimination, cultural traditions, human trafficking, sexual and non-sexual violence, a survey for the Thomson Reuters Foundation by more than 500 experts in women rights on dangerous countries for women showed that things have barely changed.

India is regarded as the “rape capital” of the world, with its capital New Delhi being one of the worst places in the world for sexual violence against women. In 2016 alone, there were 2,155 cases of rape in the capital, a 61 percent rise from 2012. In 2012, the gang rape of a 23-year-old physiotherapy student on a public bus became global news which put the spotlight on the rape culture in India.

The survey says forms of punishment/retribution such as female genital mutilation, child marriage, forced marriage, stoning and mutilation are cultural traditions in India and help to influence incidences of sexual abuse and sexual harassment against women.

The United States of America

The United States’ presence in the top 10, as a developed country, is rather baffling, to say the least. The country ranked 10 overall, ranked third with “domestic rape; rape by a stranger; the lack of access to justice in rape cases; sexual harassment and coercion into sex as a form of corruption” on the survey as the dangers the country represents to women. The survey also perceived the United States to be dangerous to women in regards to non-sexual violence – domestic, physical and mental abuse.

Overall perceptions of the state of women issues in the United States could have been shaped by the American media, and especially through the ongoing #MeToo campaign. The campaign is exposing the extent of sexual harassment and sexual assault targeted towards women by men with power. A poll by ABC news – Washington Post showed that about 54 percent of American women have experienced “unwanted and inappropriate sexual advances,” while 30 percent of American women have “endured” such advances from men. Overall, at least 30 million women in America have been sexually harassed at a work setting, while 14 million have actually been abused sexually.

Nigeria earned its place on the survey for its well-known history with sexual violence, human trafficking, and cultural traditions that are dangerous to the rights of women. 27 percent of Nigerian women between the ages of 15 and 49 are victims of Female Genital Mutilation, an effect of cultural traditions in many parts of the country. The survey also says trafficking of women in Nigeria take the form of “domestic servitude; forced labour; bonded labour; forced marriage and sexual slavery.”

In Nigeria alone, 43 percent of girls are married off before the age of 18 and against their will. The Chibok girls in 2014 were kidnapped by Boko Haram terrorists, with more than half of them still missing. Their kidnapping epitomizes the cultural influence on the rights of the girl child in Nigeria. Another recent kidnapping of schoolgirls in the Dapchi community of Northern Nigeria is proof of the importance placed on them; stripped of all dignity, they are seen as chattels for bargaining with the Nigerian government.

Also, the Boko Haram menace in Nigeria’s North East has displaced many women and children from their homes and left many seeking for shelter in IDP camps scattered around the country. Amnesty International reports that members of the Nigerian Army rape starving women in these camps, sometimes in exchange for food.

However, globally, there are different challenges to upholding the rights of girls and women. For most of the developed world, fighting sexual harassment and sexual assault is a priority, as evidenced by the #MeToo campaign.

For some developing countries, fighting child marriage is paramount. One in three women in the developing world gets married before they are 18, according to the Girls Not Brides campaign, while another report says there will be 50 million child brides around the world by 2020. A recent ruling by a Sudanese appeal court rescinding a death sentence against a teenager who killed her husband after she was married off against her wish, show that the fight against child marriage will only be won a day at a time.

For some other developing countries, suffrage rights and more constitutional rights is the challenge. Saudi women voted and ran for elections for the first time in 2015, giving them the power to also determine who represents them in their communities. And while Saudi recently lifted a ban on women driving, the arbitrary jailing of women rights activists by the kingdom shows its position as the 5th most dangerous country for women is probably deserved.