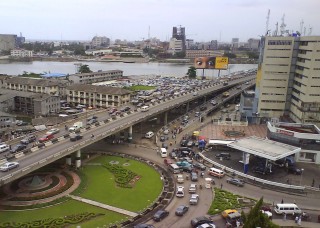 According to the latest Africa Investment Index released by Quantum Global’s independent research arm, Quantum Global Research Lab. Nigeria is the 19th most attractive economy for investments flowing into Africa. In 2015 alone, Nigeria attracted a net foreign direct investment of US$3.1 billion.

“Despite the current economic challenges, we are quite confident on the medium to long-term market prospects. Nigeria has earmarked a significant amount of capital to develop critical infrastructure in the country and there are various opportunities for public-private collaboration providing investors’ return on their investments. We anticipate that investment in infrastructure will underpin the growth of the economy and meet the needs of a large Nigerian growth population, ” said Prof Mthuli Ncube, Head of Quantum Global Research Lab.

Following the fall in global oil prices, which affected most oil producing countries in the world, Nigeria has been one of the hardest hit economies in Africa. As a result of this decline in the price of oil, Nigeria which is 75 percent dependent on oil as its only source of revenue was faced with several economic issues which include going into recession, an increase in inflation, Naira depreciating as well as foreign investors pulling out of the country.

So far, the Nigerian government has intensified its efforts towards diversifying the economy and it has laid out a roadmap to enhance public infrastructure and support high growth sectors in the country such as manufacturing, ICT, agriculture amongst others. This roadmap will enable the country meet the local demand along with boosting exports globally in the short to medium term to stabilise the macroeconomy.

Why Nigeria is also an investment destination in Africa

Nigeria is the biggest economy in Africa with a GDP of US$ 415 billion that is projected to grow to about US$595 billion by 2020. This presents a big market for goods and services. In this sector, GDP per capita currently at 2,260 is projected to leap to US$2, 907 by 2020, which could boost consumption and domestic demand. The short to  medium-term focus of the Nigerian Government is to reduce imports and address primary sector blockages, such as roads, bridges, power, railway, aviation, water, housing, agriculture, education and health.

“Despite the current market volatility, Nigeria presents tremendous investment opportunities in these areas, which would not only support the local economy but also deliver significant yields to foreign investors,” Prof Ncube said while further commenting on Nigeria’s economy.

Is the government working to make this happen?

The Nigerian government has implemented various reforms to boost and restructure the economy including the introduction of the Nigeria Industrial Revolution Plan (NIRP), establishing the Enabling Business Environment Council (PEBEC) and the microcredit scheme in the 2016 budget. The micro credit scheme will see the Bank of Industry, overseeing the disbursement of loans to 1.6 million traders, artists, farmers and young entrepreneurs over the next twelve months.

According to the report, the top five African investment destinations attracted an overall FDI of US $13.6bn. Botswana was ranked the most attractive economy for investments flowing into the African continent followed by Morocco, Egypt, South Africa and Zambia. 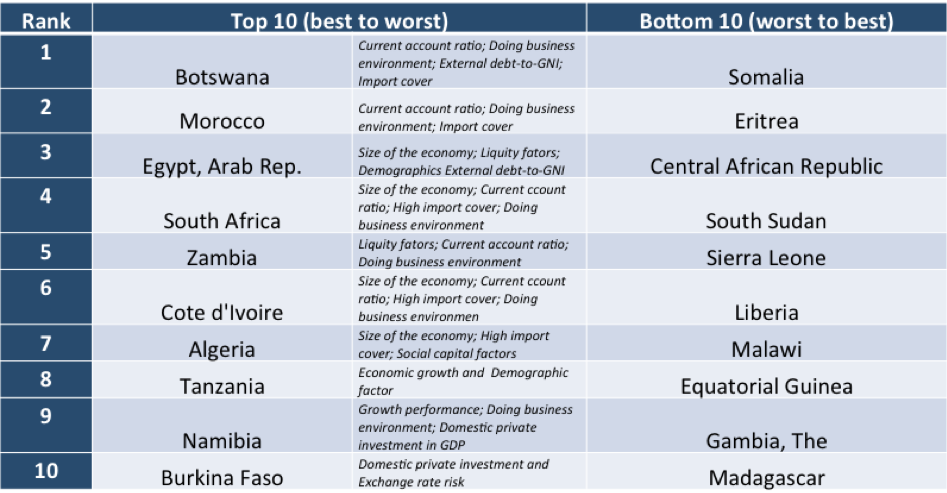 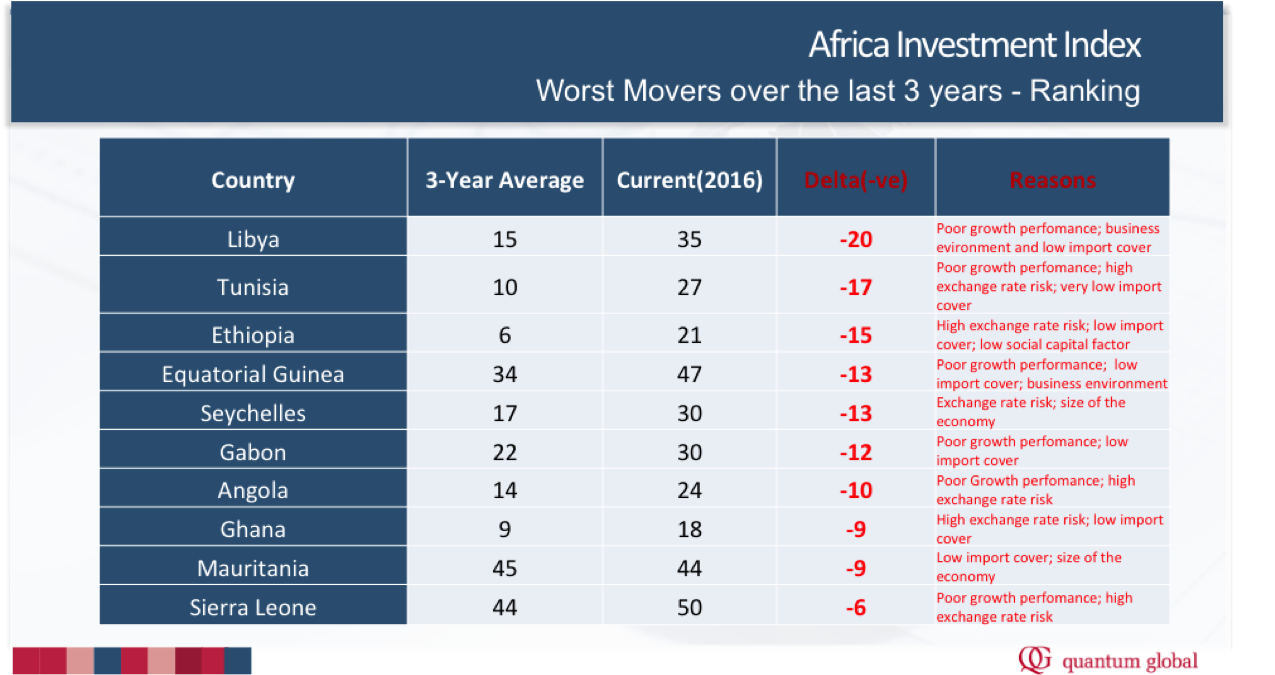 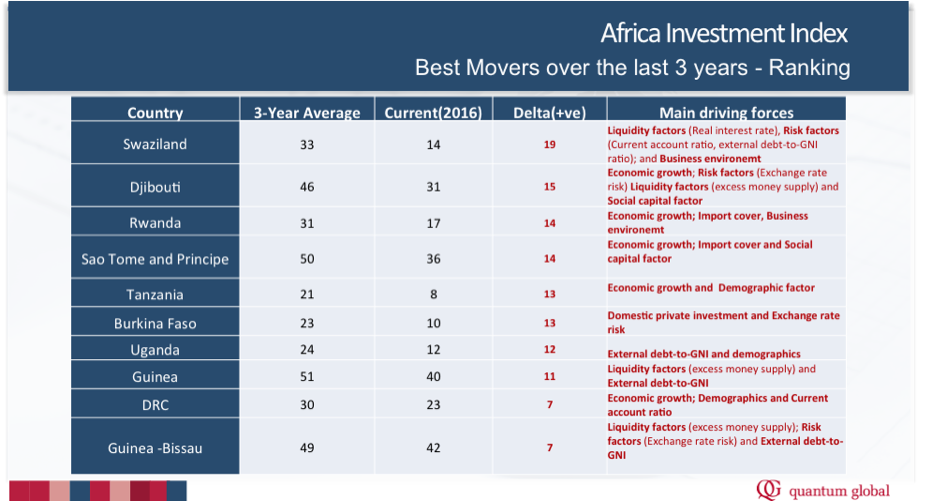 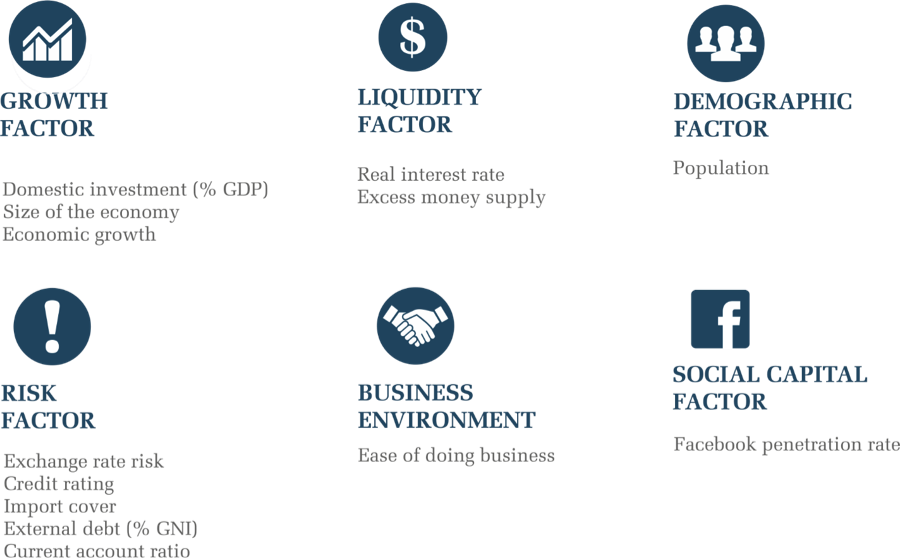 The AII indicators are based on secondary data collected from World Bank Development Indicators, the International Monetary Fund (IMF) World Economic Outlook, the United Nations Conference on Trade and Development (UNCTAD) Data Centre and own estimates.