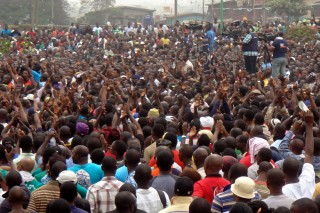 Nigeria at 62: A cocktail of hardship, disillusionment, and an eminent revolution

Asserting that the Nigerian democracy sits on a keg of gunpowder is not implausible. Recent events in Twitter’s uncensored community hint at a democratic boiling point. If you smell a revolution in the similitude of the Arab spring- as some of us do- you might as well be right. I would have said never have I seen Nigerians, especially the youth, this one-eyed towards a cause before, but I have. That was during the 2012 fuel subsidy protest, the 2015 presidential election campaign that installed President Muhammadu Buhari and the 2020 #EndSARS protest.

Unlike the first two protests, Nigerians are not fighting for a solution that would bring temporary relief or one confined within an 8-year political tenure. Instead, they seek something more sustainable and tangible, not just good governance. They seek a nation with an ideal ideology that would remodel its present political-economic ruins. You can call this a quest born out of years of economic hardship and political disillusionment.

Every nation is ruled by a political ideology adopted to spur economic growth. The ideology defines its economic existence.

Nigeria leans towards Washington’s economic ideology, although its outcomes are poor compared to the American market. As it’s said, Rome was not built in a day. America has experienced over two centuries of democracy, neatly layered with political reforms and the industrial revolution and has matured. On the other hand, Nigeria is just barely two decades into its longest democratic period since independence – heavily layered with corruption, insecurity, economic hardship and increasing emigration of its skilled professionals. People are suffering and can barely eat three square meals a day while the government tends to be disillusioned as the economy becomes increasingly dysfunctional.

As the Giant of Africa marks its 62nd independence anniversary, young people across the country took to the streets in a peaceful match to identify with the political representation of an ideology they hope to install into power by the 2023 elections. Many young Nigerians are team OBIdient. These are the supporters of Peter Obi, the presidential aspirant for the Labour Party, an underdog political party serving leading APC and PDP hard knocks at the presidential runs. However, they disregarded the ‘no-match’ court order to entrench their fundamental human rights.