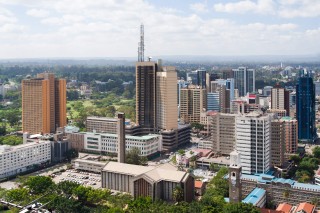 Nairobi ranks as top African city to visit in 2017

The Kenyan capital city of Nairobi has been ranked as the topmost African city for tourists for the year 2017. According to a ranking released by a top UK brand company, Rough Guides, Nairobi will see more tourists in the New Year 2017 than all other African cities.

Explaining the reason for the choice of the relatively small African city compared to Nigeria’s Abuja and Lagos, the travel publisher reckoned that Nairobi has more than its national parks, reserves, and beaches to offer travellers. Aside its world-renowned beaches that have attracted many investors in the last couple of years, Nairobi is also rich in traditional arts markets and museums of artefacts. Its beautiful urban landscape laced beautifully with breath-taking fashion scene coloured in art project would most definitely take visitor to the east African country the second time.

Kenya’s largest city, Nairobi, sitting between cities of Kampala and Mombasa, is one of the fastest growing African metropoles having over 100 international companies such as Radisson Blu, Kempinski Hotels, Crowne Plaza, Sankara, Hilton Garden, and United Nations headquarters in the country. If tourists make Nairobi their top destination, Kenya’s GDP growth prediction left at 6.7 percent by the World Bank might further increase.

Another East African country, Uganda is voted the best African city to visit in 2017, and the fourth in the top 10 countries to visit in 2017. India was ranked first, while Scotland and Canada ranked second and third respectively.