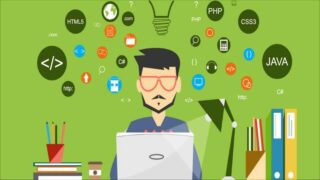 My Pivot Journal: This natural resource manager took a one-year career break to focus on his transition into tech

For Jonah Etuaful, becoming a tech bro was not a coincidence. Jonah went from being a novice who earned less than his worth to mentoring tech newbies. Currently, he is a full-stack developer that occasionally wishes he had continued on his environmental management path. This is his pivot journal.

Jonah first fell in love with natural resource management when he realized the many opportunities within the course. But it wasn’t his preferred choice. “It was a relative’s idea,” he says. “I wanted to be a lab technician.” He chose natural resource management at the University of Energy and Natural Resource, Ghana, as his first choice, and laboratory technician at a technical institute as his second. “The natural management admission came first, so I went for it. By the time I got my second admission, I had become interested in natural resources. So, I let it go,” he says.

While in school, Jonah realized he needed a side hustle to make some money. In his third year at the university, he dabbled in graphic design. “I went on YouTube, and the first video I saw was by PiXimperfect, a graphics design YouTube tutor.” The channel taught him Adobe photoshop and illustrator. He also came across videos on database, visual basics, and HTML and CSS. This would be his first brush with tech. And although the sector was experiencing a boom in Africa, it was not enough to ignite a spark in him. He focused on graphic design as his side hustle.

In 2018, Jonah graduated with honours and set out for a career in natural resource management.

Upon graduation, he enlisted for a one-year national service, and ironically, got posted to work at Plant Genetics Resource Research Institute, Bunso to work as a lab technician. After four months of working as a lab tech, he got a new role. There was no IT personnel available. And in typical internship fashion, the responsibilities of an IT personnel became part of his duties. This was how he came to love tech. “It was natural. It felt like a divine path,” he says.

Jonah’s last six months at the institution were focused on IT, troubleshooting, and support. “I had to study web programming. I started with drag and drop CMS WordPress sites. Then moved on to HTML5 with CMS and Javascript. And finally, PHB and Java language. I was at the beginner’s stage and there wasn’t much I could do with it. I also didn’t have the intention of going into it full-time. So I was fine with the basics,” he says.

When his service year ended, the institution offered him the role of both lab technician and IT personnel, with the corresponding remuneration. “But one of my supervisors advised me not to take it. She told me to pursue IT instead, that I would do good there,” he recalls. A piece of unexpected but good advice, Jonah took it.

Although he had briefly dabbled in programming, it was only after his former supervisor’s advice that he decided to transition. Jonah’s next steps were as intentional as his current job. He took a one-year career break to improve his programming skill. During this one year, he focused on Web Programming.

He started following Traversy Media and freeCodeCamp on YouTube, both channels offer web development and programming tutorials. “Those were my first point of call. I’m a tactile learner. So it was hands-on work for me. I dedicated my time and everything, and I became good at PHP and python,” he says.

He proceeded to build two software on his own, a School Management System, and a Church Management System currently being used by his church. “There were people who wanted me to monetize what I had done. But I wasn’t sure about it. I was simply building for experience,” he says. Jonah may not have been interested in monetizing his software. But one of his friends was and would go on to sell his software (with Jonah’s consent) and make some money from it.

In October 2020, almost at the end of his one-year break, Jonah signed up to LinkedIn and casually sends out job applications. “Although I had done a few gigs, I’m not sure how I had survived. I knew it was time to get a job,” he says.

Fortunately, the first three applications resulted in interviews. The initial job interview progressed to the technical test stage. It was an algorithm test. “That’s when I realised I had a lot to learn. I had no idea what I was doing, even though I had been using algorithms,” he recalls. Algorithms exposed him, and he did not get the job. “When you go for interviews and hear the stack of languages other people know, you realize you don’t know anything,” he says. The third interview was a success. He got hired as a junior developer. The third time’s the charm he thought.

Jonah joined Twitter afterwards and got acquainted with people with the same skill set. “When they talked about their salaries. I realized my salary was not equivalent to my worth,” he recalls. His peers earned three times more than he did. “That’s when I remembered how, during the interview, my employer had expressed surprise when I accepted his first offer. They even increased it. But it never occurred to me that I had negotiated for less than my worth. I was a novice who was just happy to get a better-paying job,” he says. He quit the job five days before the end of the month. “I had built 80 per cent of the advertising software for them and had started building an advertising system for their audio streaming application at that point. But I didn’t want any problem, so I left without pay. At least, I learned the security aspect of web development,” he says.

A week after, he got another offer with three times his former remuneration. He further learned how to use git and GitHub, the open-source library, React, and APIs. Jonah was now an intermediate-level programmer.

Jonah is currently the head software engineer at Hashcom Limited, a company that provides telecommunication software solutions, broadcasting-related software solutions, and mobile and web applications solutions for organizations. He works 9am to 5pm on weekdays. “The official closing time is 5pm. But sometimes, work demands I put in overtime,” he says. “My day often starts with an hour of programming. Then I review the codes of my junior engineers. I have to make sure everything is running smoothly, and that there are no security issues with our existing software.”

It’s been two years since he transitioned to tech. “Sometimes, I get jealous of my former coursemates who toed the path to mining. Their pay is huge, and they don’t do as much as I do,” he says. “But in tech, there is always room for improvement and salary advancements. So I take solace in that.” Jonah is determined to be in tech for the long haul. “Eventually, I’ll stand on my own. I am thinking of reviewing my old software. I have a long-term goal of being an entrepreneur one day, and it will be in tech. I have also started developing Hybrid mobile applications,” he says

Focus. Get all the information and mentorship you need.

“Focus on what you want. That way it is easy to navigate any confusion. Also, get the necessary information. I was ignorant of a lot of things during my transition. I wish I had a mentor. A mentor can guide you because they have been through it,” he says.