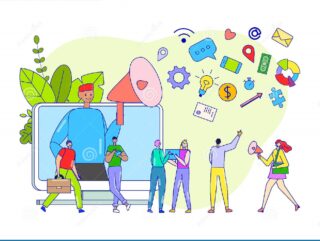 My Pivot Journal: This fashionista’s love for creativity made him a digital big wheel

Tolulope Lawal’s nickname, “Digital Jagaban,” signals his reputation and extrovert personality. His creativity, coupled with his multitasking prowess gave him a seven-year-long career path interweaving fashion, tech, marketing and entertainment. But what’s more interesting is how he’s on a mission to tie all of them into one body.

Lawal’s love for tech started when he was a child. According to him, he was the only one interested in the computer his mother bought for the home.  “After a month or two, it was obvious that nobody in the house was using the computer except me,” he said. That early love for computers led him to study Computer science at Fountain University, Osun State.

But at the same time, Lawal wanted to explore his creative side. So he became a self-taught graphics designer. “I was just playing around on YouTube till I stumbled on videos about design. I got interested and started learning,” he said.

That decision went well for him, as it unlocked an entrepreneurial journey. He went from designing flyers and posters to creating merchandise, thereby creating a space for himself in the fashion world. It didn’t take long for him to start running a clothing line. By then, one could easily have said Lawal had finally found his niche. But he was just getting started.

After Lawal graduated, he took a job as a creative art director at Naijaloaded, a Nigerian entertainment platform.  He still had his clothing line on the side. However, the business had one challenge. “The clothing line needed a lot more effort in marketing,” he said. “Even though it had become a side hustle, I wanted it to be successful.”

Lawal’s curiosity kicked in again when he realised that he needed to figure out better ways to market his brand. And since he has always been an explorer, he thought it would be interesting to learn a new skill. So he decided to learn and master the art of digital marketing.

Lawal’s first go-to platform for learning has always been YouTube. And it was no different when it came to digital marketing. It didn’t take long for him to fall in love with marketing, and he decided to take more courses. He started buying courses on Coursera and accumulating professional certifications. What started from a desire to grow his side business became another branch of his digital career.

He started getting bored with his old job and decided to try out his new skillset. He got the chance to do that with E-purse Systems Limited, an electronic payment agency whose ticketing was used on public transport services (BRT and BFS) in Lagos State. However, learning on the job wasn’t an easy ride as it required him to multitask a lot. “I was like a one-man army for the agency,” he said. “That was where I grew my strength as a digital marketer.”

Meanwhile, Lawal did not stop taking courses. He had become passionate about digital marketing and now wanted to carve a path for himself in it. But another challenge for him was that he had to find a balance between career development and caring for his family. “I still don’t think I have perfected the art of time management,” he said. “I think it’s one of my biggest challenges. But I am working on managing my time better.”

His next job was at Fritz Nigeria limited, a leading digital marketing agency. There, he got to use his digital marketing skills on a bigger scale, working with household names like Budweiser, Drugstoc, Globacom, DSTV and BBNaija.

Lawal credits his networking skills for his quick sailing. “To be honest, my network is one of my biggest strengths,” he said. “I feel like I have an amazing group of friends and acquaintances. we all look out for one another.”

Today, Lawal’s ambition hasn’t dwindled as he still doesn’t think he has gotten his big break. “I don’t think I’ve gotten a breakthrough yet. I’m still learning,” he said. However, he now aims to bring together all his passions into one brand. “I really believe that tech, entertainment and marketing are not exclusive from one another.”

As a result, he decided to focus more on freelancing his skills to clients in the entertainment industry, such as content consulting for music promotion.

Meanwhile, his entrepreneurial spirit is still alive as he still runs his clothing line and an outdoor resort service – Sunday at Lashe. “I don’t have a strategy yet. I just know I want to bridge tech, market and entertainment. So I would embrace new lucrative opportunities to learn in these sectors,” he said.

Find happiness in what you do.

Lawal believes the ideology around tech that “you don’t have a life” is a myth. “As a tech bro you can still have fun, do humanitarian work. Just do what makes you happy as a means of putting food on the table.”