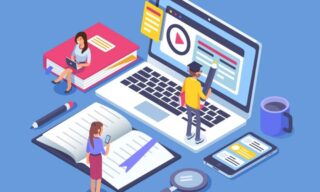 My Pivot Journal: How this teacher became an edtech founder

Angel Amayo developed an unusual fascination for technology at a very young age. “I was exposed to computers and video games from my childhood and really wanted to build something techy,” he said. But his dream of becoming a tech bro was dashed when his Alma Mata, the University of Benin (UNIBEN) in Edo State, Nigeria, denied him admission to study computer science because he didn’t have physics in his O’level result. But thanks to Google Africa Developer Scholarship, he would eventually become the founder of an ed-tech startup.

Amayo is a graduate of English Language and Literature in English. Post-graduation, he worked as a teacher at Test House Tutorials in Edo state. He also freelanced as a pronouncer with Metro Spelling Bee. (A pronouncer is an official who gives out words to be spelt at a spelling bee competition. He/she also answers questions about the definition of the words, use in a sentence, and etymology.)

His tech journey began when the organisers of Metro Spelling Bee contacted him to host a spelling bee contest targeted at UNIBEN undergraduates in 2016. “We did the event for one year. The following year, we thought to take it to students across Nigeria, and the only way to reach them easily and affordably was through the use of the internet,” he said. Going through local radio or television stations would mean spending so much on airtime and they didn’t have that luxury of funds to lavish on the traditional media, whose results were not so measurable.

Scrambling for solutions, he moved to write a proposal to software developers to create a platform that would grant more students access to the next spelling bee contest. He conceptualised the product specifications and the product design which the lead developer (Folaji Seye) adapted into a mobile app. This was in 2018. At the time, he hadn’t learned how to code. But after the app was delivered and students were able to register from across Nigeria, his interest in tech peaked. “I wanted to understand how coding works and how it brings things to life,” he said. From that moment he began to study coding for his ed-tech startup.

In 2020, at the outset of the pandemic, he got a notification from a friend on Facebook to check out a Google post. It was a proficiency test by Google Africa Developer Scholarship. They were offering free scholarships on some mobile app and software development courses. “I took the test and passed it,” he said. Then he got Google’s six-month scholarship on Mobile Web. Finally, his age-long aspiration of learning how tech products are created was becoming a reality. This was his first formal education on coding.

The journey to becoming a tech bro wasn’t smooth sailing for Amayo. Switching career paths was quite challenging, especially for someone without a tech background. He also had a job he was devoted to because it paid the bills. Consequently, he barely had time to study and internet subscription to attend online classes kept drilling a hole in his pocket. “It was challenging trying to create time to learn and apply what I learned. Data was also costing me so much money because I needed to download heavy files and also be online most of the time. But I made a lot of progress during that time,” he said.

Amayo is now the CEO and co-founder of Catchup Learning Ltd. “I function as a course creator and trainer,” Amayo said. Catchup is an e-learning platform that affords UTME students convenient and intensive learning on the go.

“As an aspiring techie, it’s useful to have an idea of a product you wish to create or a role you wish to occupy in the future before taking a deep dive into learning. I recommend learning to create a product that aligns with your passion, previous job experience or future role,” Amayo stated. He added that when people are clear about an idea they want to implement or a role they desire to occupy in tech from the outset of their journey, they will learn faster with a purpose, and won’t get lost in the numerous paths in the fast-changing world of tech.