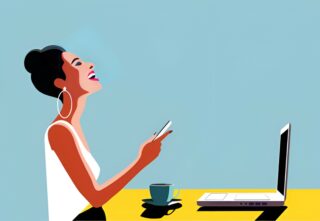 My Pivot Journal: How Jessica Uche went from being in HR to business development

Jessica Uche is versatile and does not like to sit idle. After bagging a degree in Linguistics from the Obafemi Awolowo University in Osun State, Nigeria, she headed to Lagos to pursue her dream career in Human Resources (HR). But fate had other plans for her. Uche now works as the Business Development Manager for Native Teams.

After submitting her final year project in 2019, she returned to Lagos in search of internship roles in recruitment companies since that was her dream career path. Eventually, she got a slot with iRecruiters Africa, where she interned for about three months before heading to the NYSC camp in Imo State, Nigeria.

While in camp, she joined the Orientation Broadcasting Service (OBS) and was appointed Editor-in-Chief. She became responsible for planning programs and content. “I handled everything that has to do with communications and all of the news broadcasted during our three weeks stay in camp,” she said. “I also introduced daily programs and talk shows.”

Her hard work and dedication with the OBS would later earn her a spot in the newsroom of Reach 104.9 FM. But Uche was still on the lookout for HR roles. So when there was a vacancy for an HR and Account Executive at the radio station where she served, she quickly grabbed the opportunity. “It was pretty interesting. I handled payroll and everything payable and receivable,” she recounted.

Four months to the end of her service year, COVID-19 happened. There was a global lockdown. That affected jobs, particularly HR jobs. As more people stopped going to work, companies began to lay off staff, reducing the need for HR professionals. “I did not realise how bad things were until I returned to Lagos after NYSC. I kept applying for HR jobs, but they never came,” she said.

Later, she took up employment with MA Holdings Africa (her former employer) as an executive assistant. She did that for nine months before the company laid off all its staff in May 2021. “By then, the #EndSARS protest had happened, and I was already very active on Twitter. I also had a good following,” she said. “So, I wrote a newsletter regarding my job loss on Substack and shared it with my friends on Twitter. I stated that I was open to HR jobs, but HR jobs were not forthcoming.”

On Twitter, she began to hear a lot about tech. “I discovered that tech was solving many problems using automation processes. And because problem-solving is natural to me and tech simplifies it, I keyed in,” Uche stated.

With that realisation, Uche made a Twitter post that she was ready to work with startups hiring for the role of operations manager. Her previous roles had given her hands-on experience in that area. Fortunately, the tweet got a lot of attention, gaining over 300 likes and retweets.

That led to the CEO of TruQ, a logistics haulage tech startup, offering her the role of business development officer in his company. That role was not new to her, either. So, she joined the company on the 1st of November 2021 following a series of interviews. Despite her experience in the field, she took some LinkedIn courses to level up on her skills.

Transitioning to tech was not easy. “I worked Monday to Monday and had no time for myself. Yes, I loved to work but moving to tech kept me on my toes. I had to give everything I had to it,” she recounted. TruQ was officially her first tech job. She worked with the tech startup for nine months and achieved tremendous growth.

Currently, Uche is the Business Development Manager of Native Teams. The startup is a London-based fintech that enables freelancers and remote workers to receive payments and convert them to local currencies. For B2B, the fintech enables global payroll solutions, EoR, visa and mobility assistance. The company has its footprints in over 38 countries.

Uche is the first and only Native Staff in Nigeria (and Africa). The company is looking to expand into the Nigerian market. At first, it was hard, but she had to hit the ground running. “It is my first time doing fintech. I do a whole lot of things. I had to study the difference between the fintech process in the EU countries and Africa, then tweak our products to appeal to the Nigerian market,” she said. “It is hard but interesting.

Do a lot of research and take courses. Be open to change and try new things. Connect with people in that field and volunteer. When seeking opportunities, be shameless about it. Join conversations and share your opinion. Lastly, read stories of people who have transitioned.