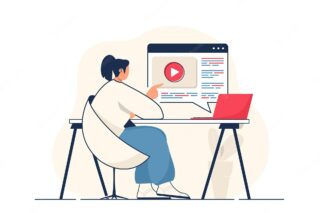 My Pivot Journal: How Folasade Daini dropped her medical profession for content marketing

Folasade Daini was excited when she found out she was admitted to the university to study Veterinary Medicine. She was even more excited to start a career as a doctor. But today, she’s leading a different path as a content strategist in the blockchain space. What makes a medical practitioner drop a life-long ambition for content strategy and marketing? Let’s find out in Daini’s pivot journal.

Daini dreamt of working in the medical field, and her family shared the same desire. So in 2011, she went to the Federal University Of Agriculture, Abeokuta (FUNAAB) and spent the following seven years becoming a Doctor of Veterinary Medicine. However, she had an unexploited hobby – writing. “I used to just write and post stuff on social media for fun,” she told Ventures Africa. “I didn’t see it as a career since I wanted to do medicine.”

After graduating from the university, Daini got her first job in veterinary medicine. It felt exciting at first. She was ready for an interesting new phase where she’d make a living from animal health, or so she thought.

Daini started her medical career with many expectations. But her experience was rather underwhelming. “First, the pay was not worth the stress,” she said. “My salary was less than N80,000 monthly, yet I was working so much that I barely had a life. It didn’t even matter that I wasn’t treating humans. There was always so much work to do. I had to work Mondays to Saturdays and sometimes Sundays.”

Her passion drifted from the medical line in a short while. “I wanted more control over my life, and I couldn’t see that happening anytime soon as a doctor,” she said. “I loved the job, but it was stressful. At one point, it seemed like the only benefit I was getting from the medical field was the ‘doctor’ title. I concluded that veterinary medicine was a great profession, but not for me.” It was time for Daini to choose a new career path.

Daini had seen many discussions about entering tech on social media. But while there was plenty of hype on coding/technical roles, she knew that wasn’t for her. “I just couldn’t picture myself coding,” she said. “It wasn’t because I couldn’t learn the skill (which might also be challenging because I don’t really like maths), but I didn’t want to enter another role I wouldn’t enjoy in the long run. Even if I learned how to code, I knew it would end up being a chore.”

Since she had always enjoyed writing content, it was her best entry point. “I started taking courses on content marketing. There were many free internet courses, but I started getting clarity when I took Salem King‘s (paid) content creation course.”

It didn’t take long for Daini to get her first break into the tech scene. After a few months of taking quick writing gigs for her friends, she got referred for a content marketing associate role at Voyance, a Nigerian data science company. However, the big challenge was learning on the job. “It was overwhelming at the beginning. I felt like giving up many times,” she said. “I was newly wedded and was trying to figure out a new job. Being able to write was not enough. Many times, I was taking courses and implementing what I learnt, and there wasn’t so much room for error.”

Her growth eventually became easier after she started being mentored by Benjamin Dada, a renowned tech content strategist. “I had a lot more clarity because of him. It was like I was standing on his shoulder and charting my path from there. He taught me several things about the job. For instance, I learnt how to deal with unrealistic expectations from organisations. Some people want you to always ideate and finish writing a blog post in one day, but it doesn’t work that way.” Daini grew under Dada so much that they started co-authoring a book in 2021.

One year later, Daini got promoted to the Content Marketing Manager position at her company, a role she held onto for the next nine months. “I realised that I enjoyed developing content strategy even more than execution.”

Today, Folasade Daini believes she is in a much better place than she was two years ago when she dropped Veterinary Medicine. She now tells stories and creates content strategy at Lazerpay, a blockchain-based payment startup led by Emmanuel Njoku. Also, she works as a copywriter for Blockchain Intelligence Group, Canada. This year, she published the book she started co-authoring with Benjamin Dada, titled “Content Marketing for Professionals.” 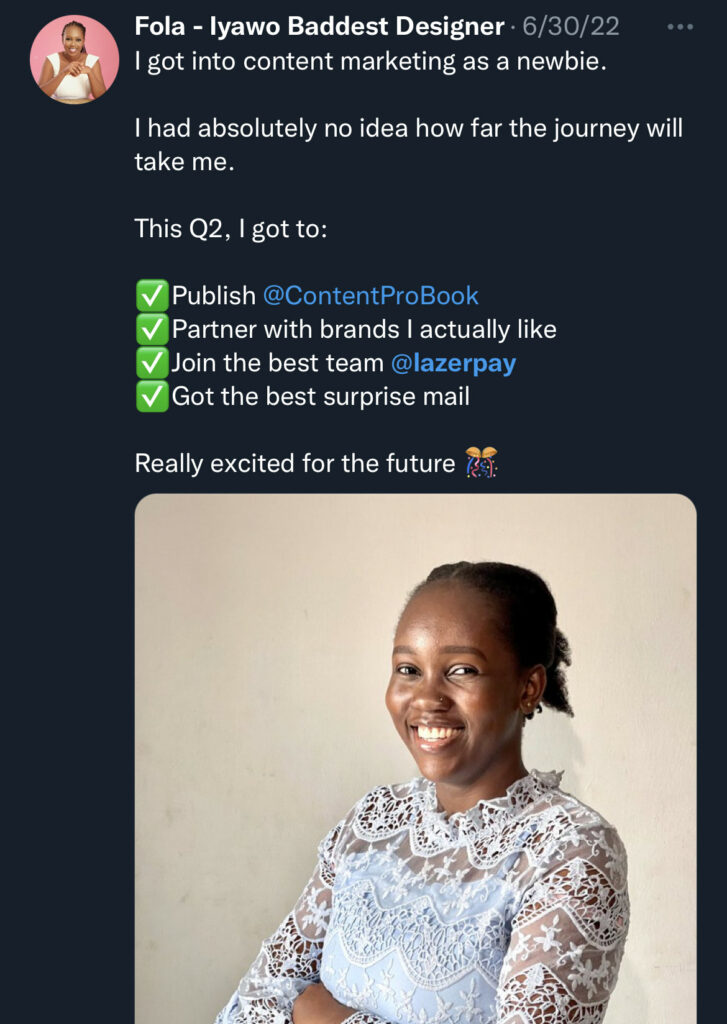 “I’m now growing into the consultancy role,” she said. “I’ve become more confident of the solutions I can provide. But more importantly, I can do all these things and still have time for myself and my loved ones.” Yet, she believes her growth story is not yet complete.

Two months ago, she started a YouTube channel, seeking to explore other channels of content creation. Since then, she has gained over 5000 subscribers. “It took only one month to monetize the channel. I’m excited for what’s ahead.”

“Value your relationship with people. You grow faster and your life is easier when you care about the people around you.”