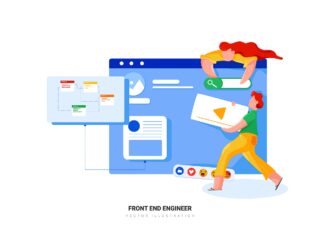 My Pivot Journal: How Florence got her groove back learning to code

When Florence Adikwu started learning about codes, she thought her brain was dead. She had always been interested in the aesthetics of tech products, so, she assumed front-end engineering was a perfect fit. Alas! It did not come to her as easily as she had thought. But she was not going to give up so easily. After all, she had abandoned a media career to pursue tech. Here is Florence Adikwu’s pivot journal.

I studied Mass communication at Benue State University. I have always been a go-getter, so even before I graduated, I interned in media houses. After graduating, I went for my National Youth Service and got posted to work in a media house. Although I was working in the media, a part of me had doubts about working in media long-term. However, I did not know what else I could do. Over time, my interest in media waned. It did not help that the probability of getting a media job was close to nothing. It was during this time I found out about tech.

I had a friend who was a software engineer. I spoke to him about trying the whole tech thing out. He told me to go for it. Once I finished service, I told myself there was no use working in media. I began searching for tech-related content on the internet. I started by enrolling in some Zero to Mastery courses on Udemy. I took The Complete Web Developer Series by Andre Neagoie and Modern React with Redux by Stephen Grider. I had no laptop then. So, I watched the courses on my phone like we do movies on Netflix. Those were interesting times.

While I was still taking Udemy lessons, a tech start-up took a chance on me and offered me an internship position. It was a six-month internship where we first had to learn the core of software development before deciding on what to specialize in. I have always been interested in the exteriors and outlook of tech products. So, it did not come as a surprise when I performed better on frontend tasks than on backend ones. I think the fact that I had started my tech journey taking online courses in front-end development also informed my decision to stick with front-end development. For me, switching to tech was quite straightforward. I started Udemy courses during my NYSC, and before I wrapped up some of my online courses, I got an internship offer almost immediately. I would say I was lucky.

But I have to admit there were several personal challenges. First, I never knew how brain-tasking tech would be. In the initial stages of transitioning, I would beat myself up because nothing was making sense. I thought I was brain-dead. Seriously, no one prepares you for that experience. I was also not coming from a science or computer-related background, so my brain had not experienced such drilling. I know people that turned their backs immediately because they realized it was not for them. I just told myself that if XYZ persons could do it, I could too. I made peace with the fact that since coding did not come naturally, I would have to work twice as hard. The second challenge I had was the lack of resources. I did not have a laptop. And the courses were not cheap. I would buy the ones I could and rely heavily on Twitter giveaways for the ones I couldn’t. I eventually got my first laptop from the company I interned in.

It has been four years since I switched careers to become a front-end engineer. My job requires me to develop interfaces and work closely with back-end developers to build the user side of applications and web pages. Basically, I bring designs to life with code. My stack is JavaScript and TypeScript with React. As a front-end engineer, I have been opportune to work with different finance and real estate tech companies in Nigeria and abroad. I currently work with a fintech company called Esusu.

Over the years, my role has expanded from just coding to including research and planning. But it is great because my job is super flexible. I work remotely, and I get value for the work I put in. The only con I can think of is the periods I lost out on good sleep because the job had to be done. But trust me, as a front-end engineer, you get to do an incredibly fulfilling job and live a good life. The only thing I would change about my pivot experience is not starting out in tech earlier than I did. I would have started while I was still in university, like most newbies do these days. I know students that earn a lot of money from tech gigs.

If you are a newbie in tech, do not skip the basics. If you do not spend time on the little things, then rest assured you will struggle with the big tasks. Fan the flame of your curiosity, and never stop asking questions.

Also, technical skills alone won’t get you far. You need to develop soft skills too. So, work on your interpersonal skills. And remember, software engineering is not a get-rich scheme. You have to be patient and put in the work. And it has to be visible.

Getting jobs in tech is not as easy as it used to be. This is because there is a high influx of talent in the tech space. So, there are a lot of great talents to choose from. This does not mean you’re not an excellent developer. It just means you have to keep applying. It is a game of numbers. It is also great to brush up on your resume for each new application. You may have to consider using the keywords from the job description in your resume.

One other thing that really helps with getting jobs in tech is networking. Network, network, network. One cannot stress this enough. It helps to attend conferences and networking events and possibly make friends or find a mentor who can guide you through your career.