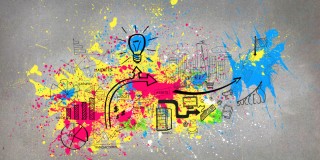 Becoming a medical doctor was Evelyn Falaye’s long-term aspiration. She did not just dream about it, she also made efforts to become one. But an endless quest for a seat in medical school and an unfulfilling farming career led her to one true passion – graphics design. Here is Evelyn’s Pivot Journal.

I have always dreamed of becoming a medical doctor. I believed my fulfilment could only come from that. So, after secondary school, I wrote the Unified Tertiary Matriculation Examination (UTME) to study medicine at the Olabisi Onabanjo University (OOU), Ogun State but was offered admission to study plant science. I took the course with the hopes of switching to medicine along the way, but I ended up taking UTME all through my four years in school.

In my final year, while I prepared for my second-semester exams, I was offered admission to study pharmacy. I had not turned 20 at the time and felt I shouldn’t miss the opportunity since it was close to medicine and would increase my chances of switching. So, I skipped the mandatory one-year National Youth Service (NYSC) and immediately began to study for my second degree in pharmacy. I am currently in my 200 level. But some unusual events shifted my perspective during the recent ASUU strike, which lasted eight months.

On February 14, 2022, the Academic Staff Union of Universities (ASUU) embarked on one of its longest industrial actions to press home its demands from the Federal Government. The move led to a suspension of academic activities in Federal and State Universities (in its union) across the country.

When the strike happened, I couldn’t go back home to my parent. I was already used to living away from home, so, I stayed back at my off-campus apartment. The uncertainties that trailed the ASUU strike made life tough. I began to scout for admin jobs. After all, I was a graduate.

It was during that period, on International Women’s Day 2022, that I came across a scholarship advert by Ingressive for Good. They were giving scholarships to women to enable them to upskill. I had nothing to lose so I applied to learn graphics design and waited for feedback.

The scholarship came almost immediately after I got a job with Celplas Industries, a plastic-making factory along the Lagos-Ibadan expressway, Ogun State. They had a large farm within their premises. Although I applied for an admin job, I was offered a farming job- a labourer’s job. But I took on the job because I needed it to make some money.

The job was quite tedious and tiring. We only had access to crude farming implements like knives, hoes, and cutlasses. My hands were blistered most of the time and I had to work from 7 am to 7 pm on Mondays to Fridays. My take home was N14,000, every two weeks. Looking back now, I would say that the pay was quite small. The job didn’t give me adequate time to learn so I had to choose what was best for me. I discontinued the job six weeks into it to focus on graphics design.

My transition to tech was not planned and it was also not easy. When I started learning graphics design, all I had was my phone. I didn’t have a laptop. There was always no power supply. I attended to my assignments at night because of my farming job. Keeping up with class assignments was a chore, but I managed to get my assignments done.

I also watched other videos on YouTube to advance my learning of what was thought in class. At some point, I had to borrow a neighbour’s laptop to practice. Then one day, I found Photo Pea, an app on my phone’s Play Store that worked like photoshop. It made it easy to practice with my phone.

The Ingressive for Good programme lasted three months (April-July). During the period, the organisers announced a laptop support programme and asked those who needed one to apply at the end of the scholarship program. I did apply and was given a laptop.

After the three months programme, I interned at a small business centre in Shagamu for three months. During this time, I would post my daily work on social media. Gradually, people began to appreciate my work and that came with freelance opportunities. People would reach out to me to do their jobs and pay afterwards. On average, I could earn N30,000 in a month, designing graphics for people, from the comfort of my bed.

Currently, I work with Ingressive for Good as an Intern Graphics Designer. My internship started in November and I work directly with the design team to produce graphic content. We have experienced hands here and I feel like I just entered the real world of graphic design with them. My job is remote. So I still have enough time to focus on studying pharmacy. Asides from these, it pays me three times better than my farming job, allows me to freelance and challenges me.

Right now, I do not have plans to stop graphic design, nor do I see it as a side gig. I plan to build a profitable career out of it. No more chasing after shadows.

Seek opportunities. Put yourself out there.

Be consistent and take it one step at a time. You won’t start earning immediately. You have to consistently put in the hard work to learn and grow before you can start earning.

Promote your work online. Do not keep your talent to yourself; people would only be willing to pay for what they can see.