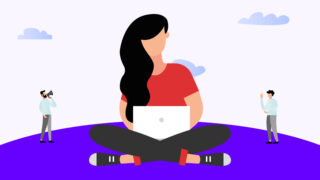 My Pivot Journal: How a Biochemist pivoted to become a program and product lead

Gift “Gigi” Kenneth has a knack for creativity. When she is not working, she writes, draws, reads, or shares memes. This creative passion has led the young biochemist to find a career in tech as a programme and product lead at Hotbed.

Gigi is a Biochemistry graduate from the University of Port Harcourt (UNIPORT), Rivers State, Nigeria. Since the 22-year-old graduated last year, she has had no reason to practice as a biochemist. “I have always been obsessed with science and learning about how things work,” she said.

Yes, she loved the sciences. But biochemistry was no longer satisfying her dreams. So she began to make strategic moves to transition from that field of study to tech while in school.

It started as a fear of the future. “I had this anxiety about what I was going to do after university,” she said.  Biochemistry was great but she couldn’t see herself practising despite her love for it. “I kept asking myself questions and started looking for ways to improve myself. In the process, I connected with a couple of amazing people in tech and knew I was ready to transition into tech.”

Gigi’s journey into tech started during her 3rd year in university. Her interest and passion for tech bloomed when she began to mingle more with the computer science students in her school. After several interactions with them, she decided to give tech a shot.

She began learning web development which she didn’t like, initially. “But after watching a Marvel movie (Iron Man 3), I told a friend I was going to build Jarvis (a fictional AI character) somehow,” Gigi said.

She later embarked on countless Google searches for suitable courses to take. Python topped the list of programming language recommendations she found. Thus, she started learning python and data science on her own. Later, she proceeded to find some local tech communities to join. “I joined my university’s Developers Student Club (DSC) and the Port Harcourt School of AI (now AI School). I liked how creative I could be with projects and how supportive the tech community was,” she recounted.

During her industrial training at the UNIPORT teaching hospital, she got an internship through the Port Harcourt school of AI. “That helped expand my knowledge of what data science looked like in the real world,” she noted. Not long after, she got a scholarship for Deep Learning with Udacity/Bertelsmann.

Gigi currently works as a programme and product lead at Hotbed, a platform that supports exceptional startups with community, content, growth tracking and investor intros. Her role entails content creation, community management, ops support for programmes, and expanding Hotbed’s ecosystem to reach founders globally. “Something I struggled with at first was the act of consistent learning. It was easy to hit a roadblock and abandon a course/project for weeks. But I have come to learn to ask for help when I need it and to also research on Google,” she said.

She also volunteers for PAWEN as the Program Manager for its women in tech initiative, TechUp Africa. At PAWEN, she helps women transition to tech. At the non-profit, she plays non-technical roles which she described as a learning curve. “Although I still make time to learn, code and write about AI, the non-technical part involves learning new skills and embracing soft skills even more.

In both roles, she enjoys seeing founders (especially early-stage ones) get the support they need. “I wish I had more of these kinds of support communities when I started out into tech. For me, helping more women transition into tech careers is a fun way to give back to the community that has helped me grow,” she added.

Try new things and learn consistently. “Be open to learning consistently and trying new things. It takes a lot of dedication to finish courses but way more grit to complete projects,” Gigi mentioned.