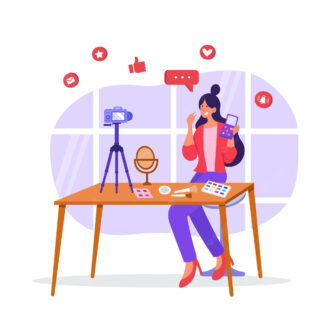 The first time Vera Chidimma Okoh (a.k.a Chief Vera) picked up a camera, she did not yet fathom how steeply it would turn her life’s trajectory. Today, her videos about the coal city of Enugu have attracted a global audience. But she was no sudden emergence.

In this week’s episode of My Pivot Journal, Vera takes us through her transition from dentistry to mastering content creation.

I was a science student in secondary school. You know how it is with science students: everyone expects you to be a doctor or at least be at that “standard.” That’s how my life started. I studied dentistry, and I was a pretty great student. I had no intentions of venturing into content creation. The closest I came to it was when I presented in school during social events.

But in retrospect, content creation has always been part of me. I remember that when I was still a student, and even after school, I had ideas about shows for educating people about dental cases. I didn’t know the name of what I was thinking about was Vlogging. Honestly, I didn’t even know vlogging was a word. I only saw the possibility of content creation through a medical lens.

After school, while waiting for my internship to come up, I started a blog. I studied dentistry, so I wrote about oral health and how people could care for their teeth. But with time, I realised that many Nigerians were not very interested in reading about oral health and the whole health stuff. So I started incorporating other topics like showbiz, gossip, lifestyle, sex and relationship. That got a lot of people’s attention. So I kept blogging, and slowly, I was moving away from dentistry.

But after a while, I had issues with my site, and the designer wasn’t helping. I got frustrated and moved my writing to Facebook. There, I started writing stories — mostly fiction — but many people took them for real stories. People started noticing my work, and I was getting a lot of engagements on my posts. Then the promotion deals came: I started getting paid to promote people’s businesses and products to my followers. Life was good.

Along the line, I started feeling like writing was not the only thing I could do. So I tried out making videos on Facebook. Every Friday, I would have a mini vlog where I’d just talk about anything — lifestyle, feminism — anything. Engagements grew gradually, and I noticed I had an audience. I remember how excited I was when I first hit 1000+ views. Later on, 1000 views became normal.

Then one day, someone reached out to me via DMs and asked me why I wasn’t putting my videos on YouTube. I thought about it: my videos were getting more popular on Facebook, but I wasn’t getting money for it. I just asked myself “what’s the worst that can happen?” and started a YouTube channel.

Starting a YouTube channel was an entirely different game. It wasn’t as easy as I expected. When I realised I needed 1000 subscribers and 4000 views before making a penny, I wanted to go back to Facebook. It’s not easy to move your audience across platforms, so even the ones I had on Facebook were not just going to follow me to YouTube. Besides, many people believe YouTube consumes more data. So a video with as many as 10k views on Facebook can have less than a hundred on YouTube. It was depressing.

But eventually, I decided to stop trying to move my Facebook audience and create a new niche on YouTube. So I started checking out what other creators were doing. I saw that many people talked about the states where they lived. And since nobody was saying anything about Enugu, where I lived, I thought that was my opportunity.

When I started documenting Enugu, many people did not believe in it. They’d tell me: “It’s not a megacity, so why would people be interested in it?” That got me worried at first. And on my part, I didn’t know much about shooting. I didn’t even know how to use a camera. I had to watch YouTube to understand my camera when I bought it. But I felt there was a market for what I was doing, even though I hadn’t seen them yet.

I also had friends who knew more about filming than I did. So I would send my videos to them to evaluate and show my errors. Sometimes, they’d troll me, but they taught me. For instance, one of my friends can watch my video and tell me: “Vera, this space between your head and your wall, are you trying to build a duplex there?” That’s how I learnt about headroom. I also started taking constructive criticism from my audience. I monetised my page in three months and haven’t stopped since then.

Monetising my page was a big feat because I know it’s not easy when you’re not a celebrity or constantly pushing viral content. But that was just the beginning. The challenges never end. Creating content can make you feel enslaved to your audience. You can get it right today, and by the next time, it’ll seem like you’re talking to yourself. Even when you feel like you already know what your audience wants, the algorithm might not be on your side. So you might create a video, and one-third of your subscribers will not see it. I still have to face the fear of trying new things.

At one point, it seemed like I had done too much content on Enugu, but your audience might not think the same. I’ve seen people dare to try something different and end up messing up their platforms. But I’ve also seen people try new things and record phenomenal growth.

Regardless, I know I belong here. Sometimes, seeing my previous works remind me that I’m on the right path. I also have fond memories, like the first time I flew a drone. I visited a community for the first time and told their story. That video was one of my proudest moments. It wasn’t just about the fact that I received great feedback. I was just proud of what I created. So even though I’ve had a lot of challenges, I’ve also experienced so much growth.

Today, I see myself as someone with an eye for stories. A couple of years back, I did not see my life panning out like this. But I’ve always stayed open-minded to growth.

I’ve now become head of content at AfiaTV. It’s exciting because there’s so much coming up, like the fact that we’re launching on DSTV soon. But at the same time, being in charge is daunting. I’m caught in the middle of dedicating my time to my workplace and creating time to make videos. It’s not easy to balance both, so I don’t have as much time for my channel as I once did. I’m still getting used to this. I still want to explore more travel vlogs. I want to cover more places and tell their stories.

But now, it’s a bit scary to travel within Nigeria. My friend was attacked and killed on his way back from a content creation trip. He was buried recently, so the memory is still fresh. Even though I’d like to travel to new places, it’s not safe. There are many stories to tell in Nigeria. We just need it to be safe.

Knowing a niche and sticking to it is a career hack. If I were doing the same thing as everyone else, I probably wouldn’t be where I am now. I found a gap and filled it. Nobody was doing what I did when I started. And the fact that I pioneered something like this gives me an edge today.