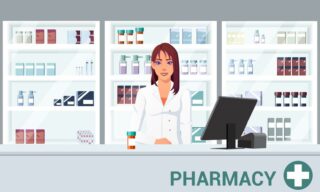 My Pivot Journal: A pharmacist’s journey to becoming a data analyst

Joyce Nwanochi is a product of two backgrounds. She is a pharmacist and data analyst with an interest in health-tech and social impact. With about four years of experience locally and internationally in the health and social impact sectors, her activities have centred around advocating for access to health services with strategies formed from well-studied data and patterns.

Nwanochi is a graduate of Pharmacy from the University of Port Harcourt. Unlike many students, she did not just go to school to study, she also wanted to make an immediate social impact. As an undergraduate, she interned and volunteered to work in health and social impact spaces. One of such remarkable engagements was working as an assistant programme director at Anti-Drug Misuse and Abuse program(ADMAP) – an initiative to curb the widespread misuse and abuse of drugs, especially among young persons.

One of Nwanochi’s many extracurricular engagements spurred her interest in tech. As a monitoring and evaluation intern, Nwanochi monitored projects that required data collection and generation to track the project’s level of impact and measure it against the proposed project idea. “We had to work on a lot of data obtained from our project and those who have done similar projects,” Nwanochi explained. She realised the data deficit in the health sector during this time. “You want to do a project, but you do not have enough data references to look at because there is a data deficit in that sector. That experience piqued my interest in data,” she stated.

All the while, she was alien to data analysis, data science or any tech skills associated with data derivation. But she decided she would learn a data-related skill.“This was a skill that aligned with my passion and my primary fields of interest, that was why I chose it,” she noted.

This awareness came in 2018, but it wasn’t until 2021 that Nwanochi started learning Data analytics in a physical school through a scholarship opportunity on Twitter. She was in her final year at the time, so she often juggled school and data classes. Balancing this was difficult because of her final year project and other commitment, so she stopped taking data analytics lessons after two months.

A short while later, she started taking online courses, one of which is the google data analytics course on Coursera and an SQL course on Dataquest. She also took some courses on Udemy. As someone who learns a lot through visuals, YouTube was her go-to learning platform. She watched the likes of  Alex the Analyst and Mosh Hedani.

However, dropping out of her physical class came at a cost; she went around in circles trying to learn online since she had no mentor or physical instructor. So rather than learn from the simple to the advanced form, she did otherwise. “I had nobody to hold my hands through the journey and had not connected with anyone in the field. I did not have a road map, so I was learning from top to bottom. This was a challenge I faced in my early months of self-learning,” Nwanochi explained.

The learning process took Nwanochi about a year. Because she has a background in social impact and has moved on to a technical role as a data analyst, she got exposed to some social impact tech organisations like where she works presently. Nwanochi is a partnership and grants lead at She Code Africa – a non-profit organisation focused on celebrating and empowering young girls and women in technology across Africa. “I lead the partnership and grants team for SheCode Africa, which has some form of technicalities because it involves working with data either quantitative or not, although it is not as complex as traditional data roles,” she said.

Interestingly, Nwanochi is currently doing her post-medical school housemanship and works in a community pharmacy in Lagos. “I do not think I want to abandon pharmacy to focus on data analysis. I am not leaving tech for pharmacy nor pharmacy for tech. There is now a place for tech in every traditional field, so we have things like health analytics which is like a merger of health and data analytics. You are using your skills in data analytics to work on the data generated from the health field. I am one of those in that merger,” she stated.

Nwanochi also has a couple of initiatives to her name, one of which is Nsonye – an initiative dedicated to bridging the gap in the tech industry and encouraging more participation of women and girls in the tech industry. Nsonye has benefitted from the global youth mobilisation fund to push its agenda. “There is an obvious gap in the tech industry, and many people are trying their best to bridge that gap. The gap was wider than before now, but there is still so much work to be done,” Nwanochi said

Be inquisitive, and unconventional.

“I have always been someone that wanted to stand out. I didn’t always want to be a regular or traditional pharmacist working in a hospital or pharmacy, facilitating medications and other things they teach us in school. This meant I had to explore beyond what I knew. That exposed me to problems in the health sector, which is data,” Nwanochi stated.