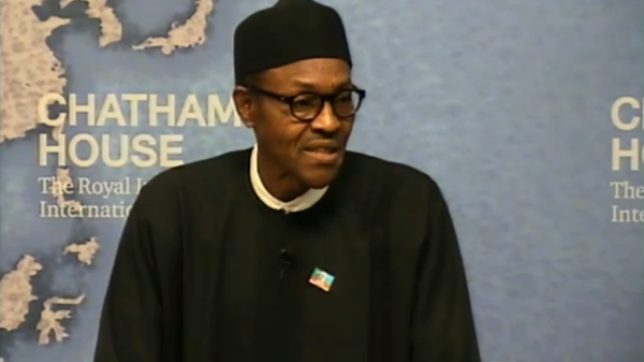 Muhammadu Buhari and the Evolution of Democracy in Africa

At the Royal Institute of International Affairs Chatham House on Thursday, before a gathering of his party members, Nigerians in Diaspora and the international community, Muhammadu Buhari, the main challenger for Nigeria’s presidential job, declared, “the global triumph of democracy has shown that another and a preferable path to change is possible. It is an important lesson I have carried with me since, and a lesson that is not lost on the African continent.” This was the former Nigerian strongman telling the world that he now abhorred dictatorships and believed in the strength of democracy. Interestingly, Buhari tied his conversion with Africa’s growing acceptance of democracy as the best form of government.

In 1983, Muhammadu Buhari, then a Major General, led a coup that overthrew the democratic government of Shehu Shagari, and instituted one of Nigeria’s most repressive regimes. He reportedly declared then that “a flawed democracy was worse than no democracy at all.” Two days ago he claimed that his decision to correct Nigeria’s ills by brute force was influenced by the tide around the continent; “… as at the time I was a military head of state between 1983 and 1985, only four African countries held regular multi-party elections.” Now, that has changed, like Buhari says he has. By the Presidential candidate’s figures, citing the New York Times, “42 of the 48 countries in Sub-Saharan Africa conducted multi-party elections between 1990 and 2002.”

So what does this tell us about the man of the moment and the continent on the spotlight? The quick answer will be the positive political evolution of Africa and its people into firm believers of freely elected representative governance. But quick answers are hardly fully correct. Muhammadu Buhari, for all his public vows to the supremacy of the rule of law, still has many sceptics—apart from political rivals—who see him as a dictator desperate to taste power and ready to do whatever to achieve this. This is his fourth consecutive attempt to gain the presidency, and the third different party under which his contesting. Many see this as the evidence of his lust for power, which was cut short for him by another coup just twenty months in, 30 years ago.

Like Buhari, Africa’s democratic credentials still has a lot of convincing to do. The continent may have elected civilian leaders all over the place, but there is little societal progress to show for it. Elections, the hallmark of democracy, are still far from free and fair in most African countries, just as there is still a pervasive lack of respect for the rule of law and fundamental human rights of all people—the foundation of this very form of government. Corruption, which democracy is supposed to diminish, still thrives gloriously in the continent, and economic emancipation for all, promised by this adopted ethos, remains a preserve of few. None of the 44 democracy-practising sub-Sahara African countries are in the first 100 of UNDP’s Human Development Index ranking, which measures life expectancy, literacy, education, standards of living and quality of life—all the things that democracy is supposed to bring.

However, it is important to note that with all its flaws, democracy has proven that it can deliver the goods of society to Africa better than any other form of Government. While the pace have been slow and not far reaching, socio-economic growth and development in Africa has been more significant in democratic dispensations. Africa’s emergence as the new business frontier is largely thanks to the institution of rule of law and liberalization of human rights and freedoms brought on by elected governments. Just as we cannot neglect the progress the continent has made under democracy, so too can we not ignore Buhari’s evolvement into a strong voice in Africa’s largest democracy. Even though he comes from a divisive past of socio-political intolerance, he is presently one of the frontline leaders of a Nigeria that is trying to prove that she is united in ideal even when divided in idea, exactly what democracy seeks to achieve. Buhari and Africa deserve to be judged with their present, no better barometer with which to do that than Nigeria’s nearby elections.

Nigeria must strive to hold a free fair and credible election; if it fails to do so, then the evolution of democracy becomes a mere facade and a mask for oligarchy. Muhammadu Buhari and every other political player in the election must also lead from the front in shunning and discouraging violence, accepting the will of the people, and respecting the rule of law and fundamental human rights of Nigerians. Buhari is, at the moment, like a Catholic who has gone for Confession; he cannot be absolved of his sins until he has done his Penance. This campaign is his Confession, after the election comes his Penance; if he wins the presidential ballot, it becomes how he leads a Nigeria in need of effective productive democracy. If he loses, it is how he leads the opposition in a country that is already surfeited with political violence that has stemmed from disgruntled politicians.

On the larger context, Africa now has to prove that democracy here is not a fluke, and that it can deliver the goods that are still in short supply across the continent. It must now get past flawed and violent elections. Votes must be treated as precious as human lives, and human lives as precious as the existence of the state. African countries must also clean up their governments; political leaders must uplift transparency and accountability from mere mantras to standard practices. The rule of law has to become just that, not the rule of a despot or the upper class, and respect of fundamental human rights must extend to all humans irrespective of ethnicity, religion, political stance, gender or orientation.