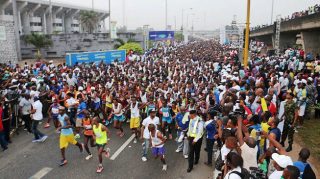 More Lagosians are keeping fit to participate in marathons

The third edition of the Access Bank Lagos City Marathon is tomorrow, February 10, 2018. The race will begin by 6:30 am at the National Stadium in Surulere for people running the 42 km marathon and finish at Eko Atlantic City on Victoria Island. There’s also a 10km family race marathon strictly for Lagosians. The marathon, now certified as an IAAF Bronze Medal marathon, is also one of the certified 88 marathons around the world, out of the over 500. The winner of the Marathon will receive N3 million, both male and female, with the top ten also receiving different prizes.

While around 50, 000 people participated in the race last year, more than that number is scheduled to run tomorrow. Over 78,000 people will take to the streets tomorrow. However, for most people, participating in the race isn’t about winning.

For some, its something they have to participate in before they eventually lose the strength to run.

“I just want to cross this off my bucket list,” Kehinde told me. Kehinde and his twin brother plan to run the entire 42km tomorrow, but at their own pace; this is not a drill, it’s just a runout.

Samad, running the marathon for the first time, says the marathon is a test of his endurance. He, along with his two brothers are hoping to run 10 km without any major incidences or challenges. “We are fit; we just want to enjoy ourselves.” There are also those for which the marathon is a serious affair, one they’ve waited a whole year for.

Rated as the 3rd most stressful city in the world, Lagos state presents many challenges for its teeming population of almost 20 million people every day; traffic levels, poor infrastructures in most parts, high levels of pollution, low percentage of green spaces, last but most important of all; bad physical and mental health. Stress causes over-eating, and this leads to an unhealthy lifestyle.

An unhealthy lifestyle is detrimental to anybody. This is exemplified by the difficulty many have in climbing the numerous pedestrian bridges in Lagos state. But the price of reversing this trend is also costly. Having a gym membership in the city is expensive for most; the price for a month’s membership in any Lagos gym averages N20,000, depending on where you stay on the mainland. Outside of the Lagos mainland, a gym membership might be a lot higher.

However, this is not stopping Lagosians. The Marathon seems like a motivation for many to be fit. There are now stories of N2,000 membership gyms, where “the dumbbells are made from concrete and we cover them with a pipe.” Everyone’s trying to be fit.

Standing at the kit collection point for the Lagos Marathon to receive their running kits, there were many people of different body sizes on the queue. “We’ve been practising for this for a year,” many of them voiced with varying levels of enthusiasm

It seems the Lagos Marathon has finally managed to engender a healthy lifestyle for some. However, like that ancient African proverb, 70,000 Nigerians will run a marathon, only for the Kenyans to win it. This year may be different.