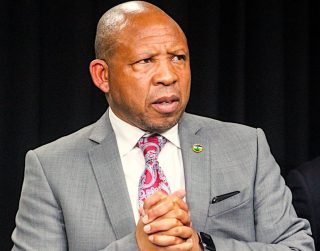 Following the resignation of Lesotho’s embattled Thomas Thabane, the Southern African country has sworn in Moeketsi Majoro as it’s new Prime Minister. This took place on Wednesday, May 20, 2020, at the palace in the capital city of Maseru.

Present at the swearing-in ceremony, Thabane was seen handing over a copy of the constitution to his successor, Majoro which formally signals the transfer of power. “I will be a true and faithful prime minister, so help me God, ”said Majoro who previously worked as an executive director at the International Monetary Fund.

The 59-year-old Majoro who is a seasoned economist and Lesotho’s former finance minister said that his immediate focus would be to keep the country safe amid the COVID-19 pandemic. Similarly, Majoro affirmed that he would address poverty and unemployment in the tiny mountain kingdom nation. “Fifty-four years after independence, the scourge of hunger and poverty is a serious issue in this country, and we need to deal with this issue decisively,” Majoro said.

Additionally, Majoro promised to usher in “a new version” of leadership and “bring back their (people’s) trust to the government” after it has been tarnished over the troubles of his predecessor, Thabane.

Apologizing at Majoro’s swearing-in ceremony for his shortcomings while in office, Thabane stated: “In as much as I tried my level best to serve His Majesty and Basotho (people) with dedication and loyalty…I may have inadvertently erred in several ways during my tenure as prime minister.” The former embattled Head of State added: “consequently, I sincerely wish to ask you to forgive me for my mistakes.”

Majoro has replaced 80-year-old Thomas Thabane, who resigned abruptly on Tuesday, May 19 after months of resisting pressure from a governing coalition to step down. The reason being Thabane is currently facing allegations concerning the murder of his ex-wife, Lipolelo Thabane, in 2017 a few days before his inauguration. Thabane was however not offered immunity from the murder prosecution in return for stepping down.

Subsequently, Majoro will serve out Thabane’s remaining term before the next round of elections in 2022.“We don’t have much time on our side. We only have two years left before the elections, yet there is a lot of work ahead of us,” Lesotho’s new Prime Minister, Majoro asserted.