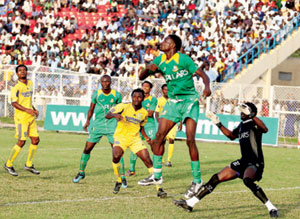 While some have welcomed the proposal as a welcome development, others have said the minister should tread with caution.

Odinga Odinga, captain of Sharks of Port Harcourt, one of the twenty teams that make up the NPFL, said in an exclusive chat with Ventures Africa welcomed the decision. “I think it is good for us here in Nigeria. If this can be done, I think it is better for the players.” However, the Sharks defender insists the problem isn’t just about agreeing to pay, but making it available when neededAccording to him: “The problem we are having is that the money doesn’t come as at when due. I don’t think all of the clubs can pay though. Only few teams can meat up. Some other teams don’t even pay. If the NPFL can abide with the rule, it will help a lot to grow the lead.Speaking on the ministers proposal, General Manager of Heartland FC of Owerri Fan Ndubuoke  said the sports minister should be properly briefed because some clubs pay more than the proposed amount. Speaking exclusively to Ventures Africa, the Heartland GM said: “Some clubs don’t pay sign-on fees and some players (there) receive up to 400,000 naira (about $2700) monthly. For those who pay sign-on fees, players get between 180,000-200,000 naira (between $1200-1500).”

Ndubuoke also adds: “in my team, many top players earn up to 6 million naira ($40,000) as sign on fees. So you see, the minister needs to be properly briefed on what really are the issues.”

According to Victor Baribote, a Nigeria Premier League chairman and owner of one of the NPFL teams, Nembe City: “This is a welcome development. While I think is it a good intention, I also believe the minister is not in charge of running football affairs. He should go through the proper channel,” Baribote told a Port Harcourt Based radio station.

Also reacting to the proposal, Media Officer of Dolphins Football Club, China Acheru said  it is “a wrong move by the league.”

“All over the world, clubs have different salary regimes and we know the big paying clubs and the small. That way, clubs are only able to sign players based on what their wage budget says. Forcing clubs to pay a certain amount is not good since clubs didn’t force players to accept the salary”, Acheru added.

Acheru who spoke to Ventures Africa exclusively also said that “what the League should do rather is ensure the negotiated wages no matter how little is paid to the player.”

Meanwhile, NPFL table toppers, Kano Pillars looks set to key into the new minimum wage. Media officer of the club Idris Malikawa says all the outstanding match bonus and debts to the tune of 35 million naira (about $234,000 ) have been cleared.