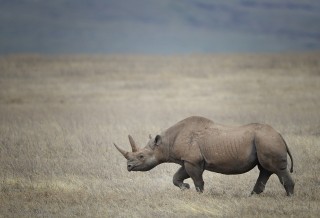 Military veterans vs. rhino poachers: The fight for conservation

In the military, they call them Forward Operating Bases or FOBs for short. You’ll typically find a long rack of helmets, body armour, guns, and supplies lining the sides of the walls – walls that are quite often made of army-green canvas stitched together until it meets the dusty dirt floor below.

Typically, these FOBs are found in the middle of Iraq or Afghanistan. And if you rewind to decades ago, they were mainstays in the jungles of Vietnam. But this FOB is different. You’ll find it sitting in the plains of Africa – smack dab in the middle of safari country.

In many ways, the base looks quite similar to what you’d see in a military movie – the insignia of US Special Forces hanging above the dining table and a whiteboard that reads, “In the absence of a plan, move towards the sound of gunfire and kill everything.”

Yet despite the sombre “motivational” quip, there’s something different happening in this tent. These aren’t active military members on a U.S. counterinsurgency mission here. Inside, you’ll find selected combat veterans who take pride in not using lethal force. They’re a highly-trained, yet ragtag group of Americans who have found their way to South Africa to protect the scarce rhino population from being poached.

It’s a thankless job. The brutal conditions require these “rhino defenders” to stay prepared and in particular do a lot of maintenance and prevention for their guns given the climate. That way they can defend the Rhinos when the time calls. They spend much of their time waiting, watching, and plotting. In many ways, they often feel ineffective. But somewhere in the middle of thorn bushes, rocks, grass, and baobab trees, these defenders do their best to poach the poachers. Because if they don’t, who will?

For decades, there were significant conservation gains made in the protection of South Africa’s rhino population. But a recent surge in poaching threatens to wipe out and reverse these gains.

According to Save The Rhino, just 13 rhinos were poached in 2007. By 2015, that number had risen to nearly 1,200. Since then, numbers have declined, but experts estimate 451 rhinos were killed in South Africa just last year (2021). This marked the first time in six years that there was a year-over-year increase in the number of rhino poaching events.

“Rhino populations, particularly in key strongholds such as Kruger National Park, in South Africa, have fallen dramatically,” Save The Rhino mentions. “They’ve had no time to recover from ruthless poaching that’s taken place throughout the last decade. The long-term impact of the poaching crisis, and the extended periods of drought, are taking their toll. Without urgent action, their numbers could dwindle.”

Poachers target rhinos for their horns, which are made of keratin. And despite being the same substance as human fingernails, a kilo of African rhino horns can fetch up to $20,000 per kg. (And depending on the black market at the time, rhino horns have been known to fetch $65,000 or more per kg.)

The demand is largely driven by the East Asia market, where rhino horns are believed to be a powerful natural medicine and status symbol. And while the South African government is focused on stopping the black market trade, they don’t have the resources to man every single thicket and bush in the country.

This is why men like Ryan Tate, former U.S. Marine, and a handful of other veterans spend their time in those FOBs – plotting and planning how to defend one of Africa’s most precious living resources without stirring up unnecessary violence.

“This is textbook counterinsurgency here. It’s unconventional warfare,” says Kevin, a British-born veteran with a decade and a half of active duty time who prefers not to publicly share his last name. “Shooting and killing are easy. The hardest thing is not shooting but figuring stuff out … if you kill someone do you turn a family, a village against you?”

Veterans like Tate and Kevin aren’t looking for praise – and they rarely get any. However, there’s something powerful and – in a world of PTSD, cathartic – about the experience of defending an animal that has 25-times the strength and power of any human being.

Yet, they keep pushing forward. Doing what they can to help save this at-risk population.

In the words of Damien Mander, founder and CEO of the International Anti-Poaching Foundation, “Seeing the rangers—what they do and what they give up. This is one of the noblest tasks and the last line of defence for nature with very little recognition for what they’re doing.”