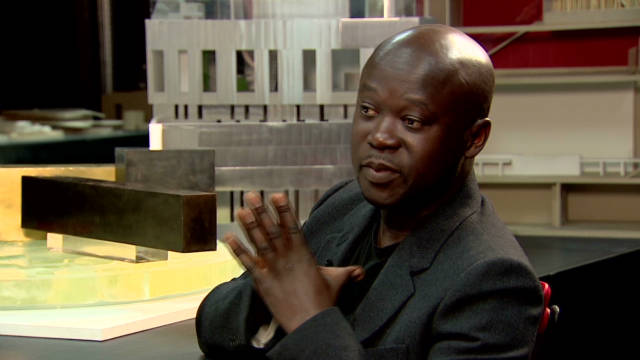 Some of his designs: Museum of Contemporary Art in Denver, The Nobel Peace Centre in Oslo, The Skolkovo Moscow School of Management and the much celebrated National Museum of African American History and Culture in Washington, D.C.

“I’m driven by the work, but I’m also driven by my need for the work to have something more, to be something more. I’m slightly burdened by being in this transitional moment.” says, David Adjaye.

He was once referred to as a Starchitect in the making by FastCompany. And is he living to the name! Describing his latest design, the new 350,000 square-foot Smithsonian museum in Washington DC, Janelle Zara of Artinfo.com writes,

His design, a collaboration with the Freelon Group, Davis Brody Bond, and SmithGroup, foregrounds his characteristic attention to texture and natural light: copper plates perforated with designs evoking traditional African crafts cover the exterior, changing color according to the position of the sun and moderating the natural light that penetrates the building; inside, wooden embellishments hang from the ceiling, with skylights throughout; and a spacious porch extends from the south entrance into the landscape. Its most distinct feature is its “corona” shape — an inverted, stacked pyramid.”

Even though the Smithsonian National Museum of African American History and Culture did cost $500 million, we are told this star architect knows how to deal with little as well as with much.

David is uniquely able to deal with the high end and the low…He does community projects with very small budgets, and he does major institutional projects with huge ones. Nobody else does that.” ,” says Stan Allen, dean of the architecture school at Princeton.

To see images of David Adjaye’s National Museum of African American History and Culture click on the slide show.