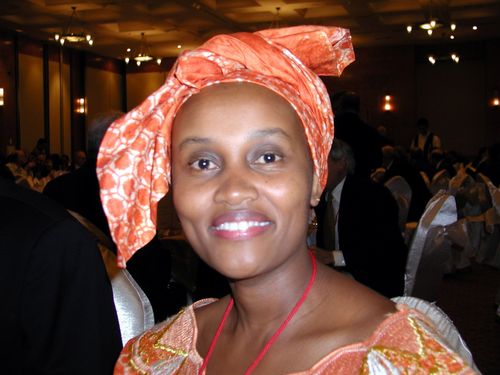 – not simply financial rewards” says the woman who turned a $500,000 startup business into East Africa’s leading Internet Service Provider valued at $173 million. Njeri Rionge is described by Forbes as one of Kenya’s most successful serial entrepreneurs and if increasing value is her definition of success, Ms Rionge is undoubtedly a serial success. Her story and where she started out makes one thing very clear: never underestimate your local hair dresser or yoghurt seller!

When asked about her first job, she says “It was a hairdressing job and I loved it. I had a fantastic time. It was back in the 1980s and I was earning between Ksh.3,000 and Ksh.4,000.” But rarely content with doing just one thing at a time, Njeri saw an opportunity to provide an additional service to her wealthy hair clients. She began taking discounted courier trips to London where she purchased luxury brand clothes and brought them back to sell to her clients in Kenya for a profit. But even before the luxury goods enterprise, Njeri’s started up a yoghurt retail venture at age 19 – her first business. She partnered with a friend who owned a car and together they would pick up yoghurt from Limuru, a Kenyan town, at 6am and drive to two high schools where they sold the treats during school breaks. They would return to Limuru every second day for more stock. Njeri Rionge’s habit of starting up several ventures simultaneously remains a fundamental part of her even today.

In the 1990’s when computers and the internet were in the global consciousness but still restricted to the business elite, Njeri recognised an opportunity to make information readily accessible to the masses through the internet. In 2000, she co-founded Wananchi Online as an affordable Internet Service Provider for anyone who wanted to access the internet. Wananchi, a Swahili word for “citizen”, was rightly named, being East Africa’s first internet service provider with the mass market – Kenyan citizens –  as its target. Njeri faced several challenges starting up Wananchi and she describes the process as a “roller coaster ride”, full of the ups and downs that come with any start up environment. An internet technology startup in Africa 2000 however also had to face the difficulties of challenging tightly-held assumptions that the internet was only for the elite. She took on the industry regulators, government and existing competition and won.

In an early interview with BBC, Njeri spoke about her interactions with Kenyan politicians: “It goes without saying that the majority of decision-makers are not aware of the benefits of the internet and most of them are actually afraid of touching and using a computer.” But the status quo has since changed as many politicians undertook training courses and began to encourage the IT sector to develop. She also faced the challenge of Kenya’s limited telecoms infrastructure, then managed by the government-owned monopoly, Telkom Kenya. Njeri and her business partner once spent 2 hours at the Telkom office filling out 600 pages of forms and making 600 photocopies of their credentials to secure 200 phone lines! The journey was tedious and often times frustrating but she persevered because of her strong belief in the value of internet access for the average household. “We know that our industry is probably one of the few mediums that can actually bridge the gap between the poor and the rich in our economy”, she said, and despite her setbacks and challenges, she has turned Wananchi Online into Wananchi Group, East Africa’s leading provider of cable television, broadband internet and internet-based phone services. The challenges she now faces include money to continually grow the business, and shortage of skilled staff.

While all this was going on, Njeri maintained her disposition towards serial entrepreneurship and started up several other ventures. She founded Ignite Consulting, a business consultancy; Ignite Lifestyle, a health care consultancy; Insite, one of Kenya’s most successful digital marketing companies; and Business Lounge, described as her ‘labour of love’ and Kenya’s leading startup incubator. Njeri is passionate about startups and does not envision herself sticking to any one project for too long, “I build organisations and then hand them over to someone else – that is my type of entrepreneurship,” she said in a BBC report. And in an effort to cultivate the right kind of environment for other entrepreneurs, Njeri continues to invest in the Business Lounge as a space for entrepreneurs to come with their ideas, brainstorm, network and develop those ideas into strong businesses. In similar vein, Njeri now promotes her own brand, Njeri Rionge, through which she provides motivational speaking and coaching services, passing on her wisdom and experience to upcoming entrepreneurs.

Njeri Rionge is particularly intriguing because she rarely mentions the role of high-level university degrees in her success. Instead, she credits the vocational certificate courses she studied with giving her the resourcefulness to start up several new projects. She also credits her travels with having the greatest impact on her career: “I have lived in seven countries inclusive of Kenya. I believe my travels to Greece, Italy, London, Canada, Spain and the US were impactful initially.” As well travelled as she is, it’s no wonder her innovations were ahead of her time. Njeri is now focused on inspiring other entrepreneurs and encouraging them to be resilient. Resilience, she believes, or having a strong backbone that can handle challenges, is the key to successful entrepreneurship.