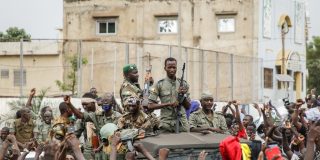 A second Malian coup in the space of nine months has plunged the country into crisis—the African Union suspended Mali’s membership in the international organization and threatened the country with sanctions, while French President Emmanuel Macron has threatened to withdraw French troops if the fresh instability leads to greater Islamist radicalization. Indeed, the fresh crisis in Bamako could have worrying implications for the broader Sahel region, especially given that jihadist groups have a long track record of exploiting political instability and that the security situation was already barely under control prior to the coup.

Thankfully, another potential catastrophe in nearby Chad appears to have been averted. After the shocking battlefield death of Chad’s longtime leader Idriss Déby in April, his son Mahamat Idriss Déby has stepped into the breach to provide some much-needed transitional stability until democratic elections can take place in 18 months’ time. The late Déby served as the West’s most reliable ally against Sahelian insurgency for decades and offered a bulwark of strength and support in a region characterized by violence and turmoil in recent years. With Mali’s political future up in the air, stability in Chad in the short and medium terms will now be more important than ever.

Last August, Colonel Assimi Goïta led a military takeover of the Malian government, ousting democratically elected President Ibrahim Boubacar Keïta in the process. A new government was quickly formed, with Goïta serving under President Bah Ndaw and Prime Minister Moctar Ouane as they oversaw a supposed 18-month pathway to new elections. However, less than halfway into that timetable, chaos has broken out afresh after a cabinet reshuffle saw two army generals lose their positions without Goïta’s blessing. He promptly ordered the arrest of Ndaw and Ouane, forced their resignations and installed himself as the de-facto leader of the country.

The international community has greeted the development with dismay. Goïta was immediately summoned to an emergency summit of the Economic Community of West African States (ECOWAS), where he was informed of Mali’s suspension from the bloc. Goïta was also instructed to release the two detained individuals – which he has since done – as well as choose a new civilian prime minister, assemble a new government and adhere to the 18-month timeline for free and fair elections.

While Goïta has released Ndaw and Ouane from custody, it’s unclear whether he will comply with ECOWAS’s other stipulations. The uncertainty has already caused the USA to pull its security assistance from the country and both the EU and France are considering doing the same. That could spell disaster for the security of the country and the wider region, especially given the consistency with which terrorist groups have leveraged such political instability to gain a foothold in Mali in the past. The 2012 power vacuum which followed the deposition of ex-President Amadou Toumani Toure is a clear case in point since al-Qaeda wasted no time in seizing the desert north of Mali in the ensuing confusion.

Mahamat Idriss Déby a steady hand on a shaky tiller

Given the upheaval in Bamako, it’s a relief that a government crisis was averted in N’Djamena after Chad’s longtime leader suddenly died. After more than three decades in power, President Idriss Déby was killed on the battlefield in April while visiting troops engaged in conflict with rebel group FACT. African politicians and Chadian activists alike feared that Déby’s death could mark a major setback in the fight against terrorism. The Chair of the African Union (AU) Felix Tshisekedi called his passing a loss for all of Africa, while French premier Macron, who attended Déby’s funeral, made similar eulogies to the fallen leader.

Déby had been one of the longest-serving Presidents in Africa, and although questions swirled around his electoral victories and his domestic human rights record, he had served as a faithful ally to the West in the fight against jihadist insurgency in the Sahel region. Chad’s military had proven itself to be the most willing and capable of the “G5” Joint Force group, involving itself in skirmishes and long-standing conflicts with such terrorist groups as Boko Haram, al-Qaeda and Daesh. Indeed, one prominent expert on the Sahel’s struggles predicted that the removal of Chad’s 1,200-strong forces from the region could precipitate the complete collapse of Mali, Burkina Faso and part or all of Niger. Clearly, the stakes could not be higher.

Fortunately, that worst-case scenario looks to have been averted for now; the swift appointment of Déby’s son Mahamat to lead a transitional government and the appointment of a civilian prime minister has likely reassured Chad’s Western allies that the country will continue to be a major force in the fight against terrorism in the Sahel. Mahamat Idriss Déby has something of a military pedigree himself, having overseen important victories at Am-Dam and Tigharghâr in recent times and it’s believed he will continue to adopt the bullish attitude to regional conflicts that were the hallmark of his father.

Chad is crucial to Sahel stability

It is to be hoped that these early days of Mahamat Idriss Déby’s tenure indicate he will stave off the threat of opportunist insurgents in the Sahel and continue to bolster the region against terrorist threats, all the while overseeing a transition to truly democratic elections. Whether the same can be said of Mali and its new interim leader Goïta remains to be seen, but the abundant uncertainty in Bamako is just one more reason why a calming presence in N’Djamena is such a critical factor at the present time.

With it looking increasingly likely that Africa is to usurp the Middle East as the epicentre of Islamic extremism for the foreseeable future – 7 of the 10 countries with the largest increases in terrorism in the last year are found in Africa, which is also home to 41% of all IS-related deaths – stability in the region is paramount to preventing further bloodshed going forwards. With Mali mired in fresh turmoil, a smooth transition in Chad is all the more vital to ensuring peace in the Sahel.