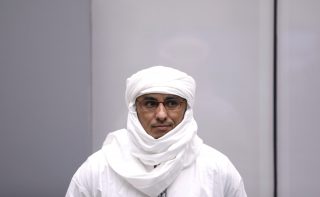 Malian Islamist rebel, Al-Hassan Ag Abdoul Aziz, who was accused of spearheading the persecution of civilians in Timbuktu and the destruction of the city’s holy grounds has refused to enter a plea. His lawyers have argued that he isn’t mentally fit to stand trial. This was disclosed on Tuesday, July 14, 2020, after prosecutors re-opened a trial against al-Hassan at the International Criminal Court (ICC).

The prosecutors have argued that the Ansar Dine Islamist group, which he belonged to, gained total control of the public life in Timbuktu after seizing it in 2012 in collaboration with Tuareg separatists.

In a statement, the ICC prosecutor, Fatou Bensoudasaid mentioned that Timbuktu’s residents were “belittled, humiliated and assaulted.” She argued that the people were “subject to veritable persecution on religious and gender grounds to which they saw no end and in which al-Hassan, the acting embodiment of the Islamic police, played a leading role.”

Legally, if a defendant refuses to enter a plea, or to even speak, then the judge will typically enter a not guilty plea on his or her behalf. In criminal cases, most defendants take up several legal postures to either delay trial or escape an actual sentence to a reduced term.

Al-Hassan was surrendered by the Malian government to the ICC in March 2018. Sometime in September 2019, the accused appeared before the ICC for trial on the charges of crimes against humanity and war crimes carried out during 2012 and 2013. They include rape and sexual slavery under Article 8 2(e)(vi) of the Rome Statute of the ICC.

On 30 September 2019, ICC judges confirmed the charges against al-Hassan, stating that the trial would proceed. But his lawyers had argued that he was innocent and that the case should be dismissed.

In the previous trial, the prosecutor of the ICC investigation in Mali argued that al-Hassan’s actions during 2012 and 2013 constitute part of the systematic policy of an organisation against the civilian population of Timbuktu.

Al-Hassan joined the Ansar Dine Islamist group in early 2012 and became an interpreter and administrator of the Islamic Police in Timbuktu during the Northern Mali conflict where he oversaw inhuman attacks.