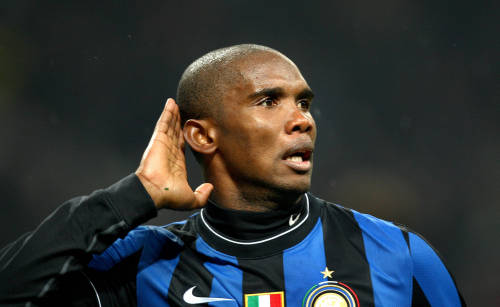 Making The Big Money Move: The Eto’o and Drogba Way!

What is the financial implication of Cameroon international Samuel Eto’o’s move to Russia? And Ivorian Didier Drogba’s contract dispute with Chelsea?

Before Eto’o’s move to Russian club Anzhi Makhachkala, there have been several African players making high profile, money making moves. From former Nigerian captain Austin “Jay-Jay” Okocha’s record transfer from Turkish club Fernabache to French club Paris Saint Germaine for about 17million pounds way back in 1998; Mahamadou Diarra’s 26 million Euros transfer from French side Olympic Lyon to Real Madrid; to the 24 million pounds each transfer of the  duo of Ghanian Michael Essien and Ivorian Didier Drogba (more on him later), moving from Lyon and Marseille respectively to Chelsea, African stars have indeed been matching their counterparts elsewhere when it comes to making big transfer moves.
However, last August’s transfer of Eto’o from Italian giants Inter Milan to Russian billionaire club Anzhi Makhachkala was significant for two main reasons: one, his reported transfer fee of between 25 to 27 million Euros is an outrageous amount of money for a 30 year old when you consider that Okocha, Essien and Drogba made their move at a considerable younger age: less than 25.

Secondly, according to the information posted on Wikipedia, Eto’o is expected to earn 20 million Euros per year after tax. I repeat 20 MILLION EUROS! Phew! Not even the two best players in the world right now Lionel Messi and Cristiano Ronaldo (who earn 10.5 and 12 million Euros respectively) earn that much. So the question is: Why did Eto’o leave mainstream Europe? Why would Anzhi spend a fortune on a 30 year old? And why did Inter Milan decide it was time to let go of their prized asset?

Quite a few analysts have questioned Eto’o’s ambitions. Others say greed was a motivating factor in the move. I quite agree- there’s an element of truth in that statement. But pause for a minute and think about this: Samuel Eto’o has won almost everything there’s to be won in football- the UEFA Champions League thrice (twice with Barcelona and once with Inter); The World Club Cup; league titles in Spain and Italy; as well as domestic cup competitions. He’s got nothing to prove to anyone again. In fact as he himself pointed out recently, if he had been white, then maybe, just maybe, he would have had the same amount of hype from the media that Messi and Ronaldo have.

Also, Eto’o is 30. At this age, this was about the last time he has to sign his last big money contract. Moving to Russia where foreign players pay only 13% of tax and having a guaranteed 85 million Euros in the course of the next 3 years is just one offer even this writer will not turn down.

The Russian club Anzhi on its part are trying to be something big. The club may not have much of a history as they were formed as recently as 1991. They returned to the Russian Premier League in 2009. But backed by the billions of owner Suleiman Kerimov, they needed to get that one global ambassador on and off the field was imperative. Just like English side Manchester City did in 2009 when they signed Brazilian Robinho, Anzhi needed that one superstar. Former Real Madrid left back Roberto Carlos was signed. But let’s be honest, this is the year 2012 not 2000. So getting Eto’o was a real big statement of intent by the Russian club.

For Eto’o’s former side Inter Milan, it was a win-win situation. The impending UEFA financial fair regulations- that a try to limit clubs’ annual losses- was one Inter was desperate to fall in line with. Eto’o had a contract till 2014 valued at 25 million dollars per year. So by selling the Cameroonian, Inter did save themselves 75 million dollars as well as get a sizeable 25-27 million Euros sign on fees on top. Bright business you’d have to admit even though quite honestly, they are missing Eto’o’s goals this term. So, Eto’o, Anzhi and Inter did come out of this deal financially better.

The same may not be the said for another African superstar, Ivorian Didier Drogba. The 34 year old’s contract at English side Chelsea runs out this summer. As one of the talismanic figures at Stamford Bridge, the Blues are keen to keep the Ivorian. However, both parties are yet to come to a compromise. Didier wants a 2-year extension to his contract but Chelsea is reluctant preferring to offer just a year. What this eventually means is that Drogba can leave at the end of the season for free.

Chelsea will ultimately get nothing for the striker who cost 24 million pounds some 8 years ago. On the plus side for Chelsea is that Drogba’s high wages (he’s on an estimated 150, 000 pounds per week) will be off the club’s books. But then again, Drogba will be free to negotiate a fat salary with any potential suitor- which going by his pedigree, will not be difficult to come by. So, come June, Drogba like his Cameroonian conterpart Eto’o, may just about be getting his final big pay day.