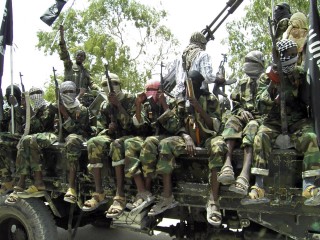 Maiduguri blast: Boko Haram says they are overpowering the military

In the latest attacks by alleged members of the Boko Haram sect, three bombs went off near a mosque on Sunday in Maiduguri, Borno state. The explosion which left eight dead and about 50 people injured, poses a setback on recent efforts of the Nigerian military in curbing the menace of the militant group. The military spokesman confirmed the blast occurred around Gomari and Ajilari area of Borno’s capital.

The militant group reportedly released an audio recording taking responsibility for the attack and calling the bluff of the Nigerian military about reoccupying some Boko Haram territories. The unknown speaker claimed that on the contrary, they  overpowered the military and had driven them out of their captured villages. Although there are doubts about the authenticity of the recording and the identity of the speaker, it has raised new concerns about the military’s claim of subduing Boko Haram. However, the military has concluded that recent attacks by the sects are only acts of desperation.

Few weeks before the national election in May, the Nigerian military embarked on the forceful recapturing of Boko Haram affected areas in the North-east, especially Borno, the centre of their activities. Earlier in the year, the military announced it recaptured towns affected by the insurgency in Adamawa and Yobe states, and later on included Bama, Dikwa and Gwoza in Borno to the list. However, cases of attacks are still being recorded in these areas which raise concerns over how effective the military has been in handling the crisis. Significantly, in March, the Chadian and Nigerien troops reportedly begged Nigerian soldiers to occupy areas that were recaptured from the sect, insinuating that they were afraid of taking charge. Again, this questioned the military’s ability to combat the Boko haram crisis.

Since the elections, about 700 people have been killed and over 200 injured in Boko Haram attacks in Borno. Borno has suffered more attacks from the group than other affected states. The state government has been struggling to stabilise society and recurring attacks have only hampered their efforts. As the focal point for deadly Boko Haram attacks, more than 100,000 camps for internally displaced people (IDP) have emerged as a result of insurgent activities. The government lamented that over 14 local governments in the states are displaced and evidently the number of displaced people will rise if the military cannot overpower the sect as soon as possible.

The Nigerian military may have achieved some level of progress but the Maiduguri blast underscores that the sect is still active and the survival of the north-east depends on the military’s ability to take charge.