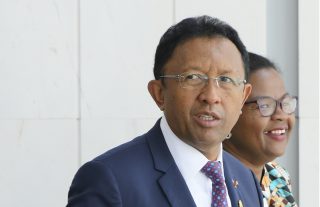 The first round of presidential elections in Madagascar will be held in November this year after the country’s constitutional court ordered the president to choose a “consensus” government and a new prime minister. This was revealed by the country’s new Prime Minister Christian Ntsay on Thursday, as he addressed the nation’s parliament on the formation of the consensus government to organize this year’s election in the country.

“A transparent and free election is our main priority,” said Ntsay to Madagascar’s parliament. The parliament has just resumed for normal business after several months of political unrest in Madagascar.

In April, Madagascar’s president Hery Rajaonarimampianina tried to amend the country’s electoral laws in a bid, many believed, to prevent former president Marc Ravalomanana from contesting in November’s election. The new laws were targeted at campaign financing for elections, and media access. The law also required all presidential candidates to “produce a report on all previous judicial convictions.” This law did not particularly favor the former president who was on the run from a coup when a Madagascan court found him guilty of many offenses.

Supporters of the opposition parties protested those laws later that month. The president called the demonstrations an “attempted coup,” adding that it was illegal, hence encouraging police and soldiers to fire on the protesters. Two of the protesters died, while more than ten were injured. As a result, the country’s High Court abolished the law, stating that it didn’t comply with “constitutional principle of equality between candidates in the various elections.”

The former president Marc Ravalomanana was unseated in 2009 after a coup, and fled to South Africa. The coup led to a mass exit for foreign investors who couldn’t operate their businesses under political instability, while many donors also withdrew their funding to the country. These factors led to Madagascar being one of the poorest countries in Africa, with a GDP per capita of $420 and leaving many children malnourished, despite being rich in nickel, cobalt, gold, uranium and some other minerals.

In preparation for the upcoming elections, Madagascar’s president Hery Rajaonarimampianina, who will also be re-contesting, named a new cabinet and a Prime Minister earlier this month. Madagascar’s constitutional court mandated the president to step down 60 days to presidential elections. The new “consensus” government will over see the handover of power to the winner of the elections.

The first round of elections in the country have been set for November 7 while the second round is set for December 19.