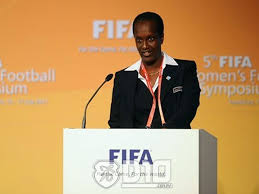 Burundi football fans and Africans at large celebrated on Sunday as the country’s football association’s president, Lydia Nsekera was elected as the first woman member of the world football governing body, FIFA.

Nsekera collected 95 votes on Friday, ahead of the 70 gained by Moya Dodd from Australia and 38 for Sonia Bien-Aime of the Turks & Caicos Islands.

“African woman can, and I am here to prove it, despite the hard task I will be obliged to accomplish”, Lydia Nsekera said.

46-year old, Lydia Nsekera was elected as the Burundi Football Federation president in 2006,  a term which has almost expired.

On her new post, Nsekera is expected to stay on the FIFA committee until 2017 because she will be serving for a four-term period, expiring in 2017.

Burundi football fans made a long queue in front of Bujumbura international Airport before heading to central town with a long escort of fans.

Since, 1904, no woman had been elected to partake in a FIFA Committee.

Nsekera said it is time to raise awareness among women to love football.

“My term is not only for Africa,” she said. Its “for women allover the world,” she added.