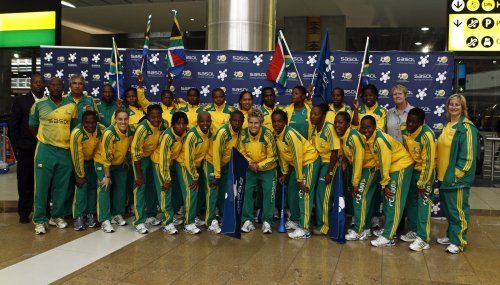 just about a month to this year’s Olympics games, South Africa’s women football team, Bayana Bayana are aiming to fly the continent’s flag as well as cause upsets at the London 2012 event. That is according to Bayana Bayana striker Portia Modise.

The South Africans forced their long time rivals, Nigeria’s Super Falcons to a goalless draw in a friendly played on Saturday in Lagos.

And speaking to the BBC after the game, Modise said: “We can surprise people because we’ve been having good training camps and the team is coming together. I think we can go out there and make our mark.”

However, Modise who has scored an incredible 71 goals in her 92 appearances for her ccountry reckons achieving this will be difficult.

“There’s too much pressure, it’s not going to be easy,” she said.

Bayana Bayana will kick off their Olympics campaign against Sweden on the 25th of July–two days before the opening ceremony of the London event. Their second game is against Canada on the 28th while they round off against World Champions, Japan three days later.