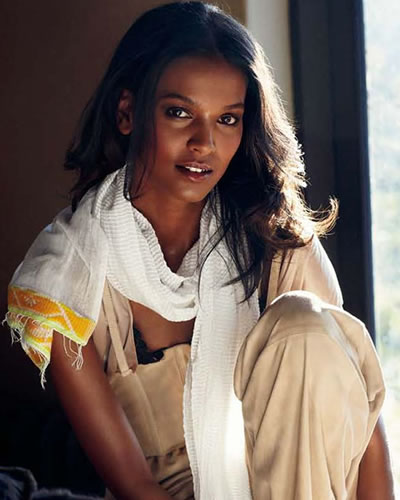 LIYA KEBEDE: The Ethiopian Supermodel With A Beautiful Heart

Ethiopian Supermodel, Liya Kibede, lights up runways in Paris and New York, all honey brown skinned and long limbed. And like Warie Daris, Iman, Naomi Campbell, Tyra Banks and her other black supermodel sisters, she broke through the colour barrier in the modelling world to become the first woman of colour appointed face of Estee Lauder cosmetics in a multimillion dollar contract in 2003 – it was the first of its kind in the 57year history of the Estee Lauder brand.

Kibede was born 34 years ago in Ethiopia and like fellow African models, Somali born Iman and Waris Dirie, she had fortune on her side:  She was spotted as a young student in Addis Ababa, by a film director whose recommendation got her signed by a French modelling agent. The rest is like a Cinderella story.

She relocated, first, to France and found it a discouraging experience as she struggled to get modelling jobs because she didn’t have the look most designers wanted. She moved to the United States and after a stint as a catalog model while living with one of her brothers in Chicago, she was eventually signed on to IMG – to pursue modelling full time.

Breaking into the industry in the US was no mean feat for Kibede as the colour barried stood as a challenge. According to a Time magazine article, fashion industry casting agent James Scully flipped when he first saw photos of Kibede in 2000 but he had trouble finding others whose enthusiasm matched his. Each time he took her portfolio around to designers and advertisers the response was usually, “wait until she’s more experienced.”  Scully aligned the rejections to the colour barrier, which not only affects black models but also Asian and Hispanic models.

“I’ve had a photographer’s agent tell me he doesn’t know how to shoot black girls,” reports Scully adding that these are just a few of the responses he gets.

However in that same year Kibede got her first big break when fashion designer Tom Ford featured her in his Gucci Spring 2000 show. Her work with Ford gave her much needed publicity and she continued to be sought after from then on.

Ford described her thus in Town and Country magazine; “She has a raw, exotic strength and at the same time she is incredibly soft, elegant and very feminine.”  Since then, Kibede has appeared on various fashion magazine covers including French Vogue, which gave her huge coverage in its May 2002 issue, American, Spanish, Japanese and Italian vogue, Harpers and Queen and Essence and has done ad campaigns for Dolce and Gabbana, Yves Saint Laurent, Victoria’s Secret and Louis Vuitton among others.

In 2007, Forbes named her among the world’s highest paid models with annual earnings of 2.5million dollars. Nonetheless, what the supermodel will consider one of her greatest achievement yet is seeing that her participation in the fight for the health and well-being of women and children in developing nations will yield great results.

Kibede had always shown interest in being an advocate for women and children in Ethiopia. Having been born and raised there, she has a firsthand experience of several challenges women and children.  However, she was shocked to learn about some of the WHO’s reports on maternal mortality in Ethiopia and some parts of the world where the scourge was still prevalent. Hence in March 2005, the Director General of the World Health Organisation (WHO) Dr Lee Jong-Wook appointed her as WHO’s Goodwill Ambassador for Maternal, Newborn and Child Health.

“Liya is a perfect ambassador for this issue – not only is she a young woman and a working mother – she is an Ethiopian who has risen to the top of her industry. She has experienced firsthand the huge gap that exists between two very different worlds and she passionately wants to use her global success and visibility to help bridge this gap,” he quipped about her.

Kibede’s appointment puts her in the forefront of the scourge. She would be assisting WHO in fighting maternal, newborn and infant mortality in developing nations- a crisis which statistics depicts more than half a million deaths for women during pregnancy and childbirth and nearly 11 million child mortality before their fifth birthday.

“As an Ethiopian and a mother, I was shocked to learn that so many women and children continue to die unnecessarily each year. In Ethiopia one in14 women die in pregnancy and childbirth and two in every 10 children die before their fifth birthdays. I am completely committed to using my profile to help ensure that these women and children’s deaths no longer go unnoticed and unchallenged,” she said responding to the appointment.

She went on to set up the Liya Kibede Foundation to raise funds for various needs including providing health care services for women in rural Ethiopia amongst others. Kibede has continued to take every opportunity to talk about the issue of maternal, newborn and infant mortality; addressing a meeting of women parliamentarians at the House of Commons in London in 2007.

In 2008 she was guest speaker at the launch of the Adolescent Girl Initiative (for developing countries). In her speech, she said: “By stressing economic empowerment, better access to education and health including sexual and reproductive health this initiative strives to empower girls to participate actively, effectively and equally with boys at all levels of social, economic, political and cultural development.”

She has also been a part of the campaign for an HIV free generation. Little wonder she was reappointed a WHO Goodwill Ambassador in 2007, named a young global leader in 2010 by the World Economic Forum and named one of Times 100 most influential people in the world in that same year.

Still in the line of her passion for advancing the plight of African women and children, she played Somali born supermodel and humanitarian Waris Dirie’s character in a movie adaptation of the latter’s memoirs– Desert Flower. Kibede was praised for her portrayal of Dirie’s life story; growing up poor in Somalia, finding her way to the UK to escape an arranged marriage at age 13, being spotted by a photographer while working in a fast food joint in London, the beginning of her modeling career, her opening up about the female circumcision ritual she had to undergo at age three and being sewn back up with a thread, and her work as a UN spokeswoman fighting against female genital mutilation. The film premiered in 2009.

Outside of modeling and pursuing humanitarian causes, Kibede is a wife and mother of two, as well as a designer, launching her Lemlem line of clothing in 2008, her venture into cloth designing is another way of giving back to her roots as the clothing material are woven and embroidered by local weavers and craftswomen in Ethiopia.