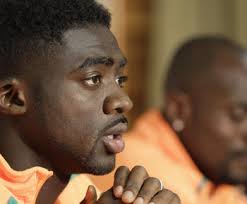 A statement  by the Anfield club said: “Liverpool Football Club can today announce they have agreed a deal in principle with Kolo Toure to join the club on July 1.The powerful defender will be registered as a Reds player when his current deal with Manchester City expires.”

The Ivorian international is expected to take a pay cut from his £90,000 ($135, 242) per week deal with present club Manchester City which officially ends  on the 30th of June.

The 32 year old will reportedly sign a one year contract with Liverpool with an option of another year.

Toure has played in England since 2002 after joining Arsenal from Ivorian giants ASEC Mimosa for £150, 000 ($225, 402). He has won two League titles with Arsenal and Manchester City as well as three FA Cups medals with both clubs.

In a related development, Nigerian born Italian youth international, Stefano Okaka could be playing in Italy’s top flight next season if reports from Tuttomercatoweb.com is anything to go by.  The Parma-owned striker who has spent the last season on loan at Serie B side Spezia is reportedly on the wish list of new Serie A comers Sassuolo as well as established campaigners such as Chievo Verona and Bologna.