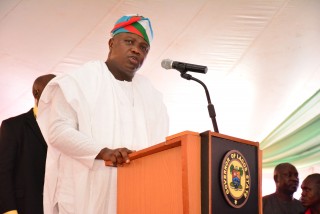 On Wednesday, 1st March 2017, Lagos state governor, Akinwunmi Ambode announced that his administration is ready to take over the National Stadium, Surulere, from the federal government and transform it into a world-class sporting centre. The decision was taken after the governor alongside the Minister of Youth and Sports, Mr Solomon Dalung, and Nigeria Football Federation President, Mr. Amaju Pinnick had an inspection tour of the facilities in the stadium.

“We cannot fold our arms and leave this monument to waste away. The last match that was played here was about 15 years ago,” Governor Ambode said.

According to Ambode, the stadium had degenerated and I would restore the old glory of the stadium once the Federal Government gave it to the state. He further said rehabilitating the stadium would bring about employment and aid family bonding.