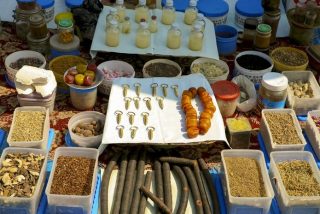 The Lagos state government has inaugurated a 27-member Traditional medicine research committee, strengthening its commitment to the development of traditional, complementary and alternative medicine.

This committee will be tasked with research on traditional treatment and presenting data to advance the traditional practice across the state. Lagos State Commissioner for Health, Prof. Akin Abayomi spoke about the development and the future of the partnership, assuring Nigerians of the commitment and focus of the state government in making healthcare better for all residents. He believes the new research group will go a long way in further understanding how traditional medicine works and also give it a unique place in Lagos healthcare.

“The inauguration of this group is coming at an auspicious time when there is increasing emphasis on the need for the integration of Traditional, Complementary and Alternative Medicine into the universal healthcare delivery system globally, internationally and in the country as a whole,” Prof. Akin said.

Traditional medicine is largely discriminated against, due to the practice and presentation nation-wide. The industry is largely unregulated and has little or no standards but yet widely consumed, this has led to the creation of the research committee. The results will go a long way in guiding the practice, give more exposure to the contents and dosages.

The state government has identified a unique niche in healthcare. it hopes to advance the traditional practice on a professional approach and practical approach by funding the forthcoming research. Prof. Akin said “From the composition of this research group, I am assured that Lagos state will be the first to start offering scientific explanations for the use of herbal medicine in the management of human health challenges”

However, there has been some controversy between scientific and traditional professionals. Occasionally scientific professionals have raised concerns that traditional medicine is largely unregulated and filled with quack practitioners. They believe the little knowledge of the herbs, concoction and their form of treatments endanger public life. This initiative might breach the gap between both parties.

If the development is followed squarely, it can have an advantage in the country’s economy, putting it on the same path as China that has advanced its traditional care system over scientific medicine. Traditional Chinese Medicine’s Efficacy had an export value of US$3.72 billion in 2015.

Nigeria is largely blessed with medicinal plants and forest. If wisely explored, it can create the potential for exporting Nigerian made medicines and offering traditional healthcare. This will not only build a profitable enterprise but also a taxable business for government agencies.