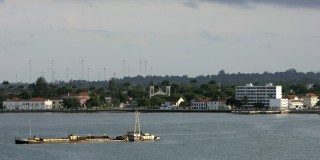 The Lagos State Governor, Babajide Sanwo-Olu has inaugurated ferries as a means to relieve Lagosians following the recent ban on tricycles and motorcycles.

Since the enforcement of the governor’s directive on the ban, commuters have been seen struggling to get transportation to their respective destinations while gridlock continues to persist within the state. Therefore, in an effort to make up for the ban on the operations of commercial motorcycles and tricycles in the state, the government launched 14 new ferry boats to strengthen its public transportation system.

Sanwo-Olu said the decision of the ban was due to security and safety reasons while the launch of the ferry system is expected to cover up for the effect of the Okada and Keke ban in areas of the state that can be reached through the waterways.

Speaking at the Badore Ferry Terminal where he inaugurated the Lagos State Ferry Service (LAGFERRY) and a mobile app, the governor said no responsible government would support insecurity whatsoever.

“Let me tell you about the ban which we just enforced. We will sustain the ban on motorcycles and tricycles, mainly because of security and safety reasons. Security and safety of citizens are paramount to any government. As a responsible government, we will not fold our arms and allow security breach in the state.”

“We will continue to ensure the safety of our people on all fronts. There have been reports of serious security breaches and safety concerns in areas where these operators ply. We had to respond to these concerns because life and safety matter to this government,” the governor added.

The state has a target of lifting at least 480,000 passengers on the waterways. But the newly launched ferries can only take up to 40 to 60 passengers at a go and will commute to Ikorodu, Ebute Ero, CMS, Badore and Ikoyi areas of the state.

While the government recently inaugurated the alternative transportation system (LAGFERRY) to address the gridlock affecting the state, it must also ensure that safety measures are put in place to guarantee safe and hitch-free transition. It includes Bailers, Bilge pumps, Distress flares, Electronic position indicating radio beacons among others.

In this regard, many developed nations regulate their waterways system and introduce standard measures so as to protect its users while on the journey.

The government of India constituted an Autonomous Body, Inland Waterways Authority of India (IWAI). The body set up rules and guidelines protecting its passengers. It also creates awareness and training of boat operators, local panchayat level officers and district administration.

Diversification of the intermodal transportation system is paramount as the state moves to develop strategies for reducing congestion of roads, which accounted for over 90 percent of commuting in the state. Meanwhile, Sanwo-Olu re-affirmed that the ban on the motorcycle and tricycle riders in some parts of Lagos was irreversible.