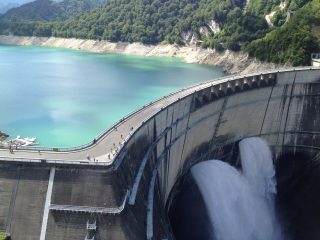 Lagdo Dam: How Nigerians are paying for the irresponsibilities of past governments

Since the year began, Nigeria has experienced flash floods that have destroyed sources of livelihood for many people in rural communities and claimed several lives. When it began, the floods were attributed to climate change. But in early October, over 20 states in the country recorded unprecedented floods that claimed hundreds of lives and destroyed infrastructure as water submerge communities.

Indeed, the country is experiencing incessant rains, but the recent severity of floods in many parts of Northern, Eastern, and Southern Nigeria has been linked to waters from the Lagdo dam in North Cameroon. In September, Nigeria’s National Emergency Management Agency (NEMA) advised the government to brace up for floods following Cameroon’s release of excess water from its dam on the 13th of September. Similar announcements were also made by the Nigerian Meteorological Agency (NiMet) and the Nigeria Hydrological Services Agency (NIHSA).

According to Mustapha Ahmed, the Director-General of NEMA, thirteen (13) states would suffer severe floods as a result of water from the Lagdo dam. The states include Benue, Adamawa, Taraba, Niger, Nasarawa, Kebbi, Kogi, Edo, Delta, Anambra, Cross River, Rivers, and Bayelsa.

The Lagdo dam operators had commenced the release of excess water to reduce water pressure from the dam. “We are aware that the released water cascades down to Nigeria through River Benue and its tributaries, thereby inundating communities that have already been impacted by heavy precipitation,” Ahmed mentioned. He further said that the released water would complicate the situation downstream as “Nigeria’s inland reservoirs, including Kainji, Jebba, and Shiroro, are also expected to overflow” throughout October.

The Lagdo Dam and the non-existent Dasin Hausa Dam

The Lagdo dam is a reservoir located in Northern Cameroon- 50 km south of the city of Garoua, on the Benue River. The dam was built by former President Ahmadou Ahidjo’s administration to supply electricity to the northern part of  Cameroon and allow the irrigation of 15,000 hectares of farmlands downstream.

According to a report by investigative journalist, David Hundeyin, it was projected that the dam would have a downstream effect on Nigeria. Thus, both countries signed an agreement, in 1977, for Nigeria to build a counter dam called the Dasin Hausa Dam in modern-day Adamawa State, which would have to receive water whenever the Lagdo dam was opened.

The Dasin Hausa dam was supposed to be two and a half times bigger than the Cameroonian dam. The report noted that it would have supplied at least 300 MW of hydropower to the national grid and irrigated about 150,000 hectares of farmland in Adamawa, Benue, and Taraba states.

Following the agreement, Nigeria began construction of the Dasin Hausa Dam. However, the construction stopped abruptly in 1983, following a military coup d’etat that ousted President Shehu Shagari and ushered in General Muhammadu Buhari as Head of State.

In light of this, Suleiman Adamu, the Minister of Water Resources has debunked the news that Nigeria signed an agreement with Cameroon to build a counter dam. He also said that water from the Lagdo Dam in Cameroon is not responsible for the flooding that has devastated parts of Nigeria.

But in 2012, water released from the Lagdo dam flooded several states in Nigeria resulting in deaths and loss of properties. A bigger effect of the flooding was at the lower Benue river region where more than 10,000 homes and over 10,000 hectares of farmland were water submerged for over two weeks. The BBC reported then that dangerous animals, including crocodiles, snakes, and hippos, had found their way into homes in Makurdi, Benue State.

It will not be responsible to attribute the recent flooding in many parts of Nigeria to climate change alone. It should also be attributed to the misfortune of more than four decades of successive irresponsible government officials. How can the giant of Africa know the right thing to do and still not do it? Government and stakeholders should accelerate efforts to build the Dasin Hausa Dan.