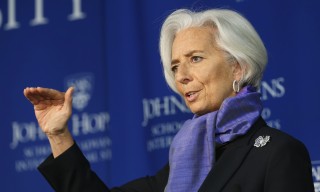 Saddled with the responsibility of securing financial stability and sustainable economic growth, the International Monetary Fund (IMF) and World Bank has warned that by 2030, nine in ten extremely poor people in the world will be Africans.

The international development agencies raised concerns over the impending growth forecast in poverty at the ongoing 2019 Spring Meeting in Washington D.C.

Newly appointed World Bank President, David Malpass and IMF’s Managing Director, Christine Lagarde both agreed that the economic crisis is attributable to some financial stress in large emerging markets. Also contributing to the malaise is corruption and mismanagement of public funds, lack of transparency and accountability as well as a constant incurring of debts by African countries.

IMF recommends that Nigeria and other developing countries should shun loans from China. This is because the loans do not align with the Paris Club arrangements and sometimes may not be beneficial to the borrowers.

Speaking on this, Financial Counsellor and Director of the IMF’s Monetary and Capital Market Department, Tobias Adrian, urged countries to make sure that when they borrow from abroad, the terms are favourable for them.

“In particular, we tend to recommend that loans to countries should be conforming to Paris Club arrangements. And that is not always the case in the case of loans from China,” Adrian said.

Not only are these loans unfavourable sometimes, but most developing countries also lack proper management and good governance to channel these funds into the right sectors.

For instance, countries like Zambia have had to give up its state-owned Kannet Kaunda Airport, National Broadcasting Corporation and Zesco power plant as a resultant effect of its default on the loan from the Asian country.

While Nigeria was in total indebtedness of $3.22 billion to China as at the end of 2017, according to the Debt Management Office (DBO).

Adrian called on emerging markets making volatile capital flows to limit their dependence on short term overseas debt, as well as policymakers to develop tools that can help sustain the financial system.

The IMF also advised against the continual subsidies placed on fuel by Nigeria and other developing countries alike. The Fund said the removal of fuel subsidy will help boost revenue and improve local infrastructure and other social services.

As observed by Lagarde, Nigeria ranks amongst countries with the “lowest tax to GDP ratio which signifies low revenue mobilization for the government and the only way to fill in the gap is to remove subsidy.”

Rightly so, fuel subsidy in Nigeria cost about $5.2 trillion between 2015 till date. Thus, its removal will free up funds to provide other basic amenities like hospitals, schools and other Infrastructure needed to move the nation forward.

In line with the issue of revenue mobilization, the IMF has told Nigeria to adopt a tax reform that cuts down on incentives and exemptions. Removing tax exemptions would increase the country’s capacity to generate internal revenue, thereby reducing its total dependence on oil for income.

This recommendation comes a few days after the Nigerian government announced its decision to increase Value-added Tax (VAT) from 5 percent. More aggressive tax reforms will also help to sustain and increase Nigeria’s revenue base.

Gita Gopinath, Chief Economist at the IMF recommended that a more rigid fiscal policy will be good for Nigeria.

“Fiscal policy needs to tighten further for which mobilizing more non-oil revenue is very important,” the economist said. Some of the benefits of a tight monetary system include the monitoring of cash flows alongside lower credit rates.

With the growth projections earlier released by the IMF and World Bank, African countries are in need of a detailed structural reform, that will cause growth both in the private and public sector.