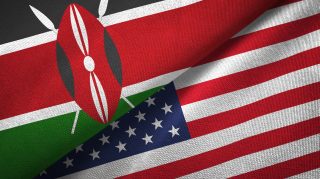 Recently, there has been widespread speculation Nairobi and Washington would seek to open a free trade agreement (FTA) in the coming weeks. The deal is meant to replace the African Growth and Opportunities Act (AGOA) agreement, a trade preference program set up in 2000 that provides duty-free entry into the U.S. for almost all African products, from oil and agricultural goods to textiles, farm, and handicrafts. But the Act, which has been at the centre of U.S.-African engagement on trade and investment for two decades, expires in 2025.

The planned agreement with Kenya, meanwhile, is a first for U.S. trade relations in sub-Saharan Africa and signifies a shift from multilateral trade deals, such as AGOA, to bilateral free trade agreements with individual countries. If signed, the deal would see Kenya open its borders for duty-free imports from Washington, while Nairobi would also get to export a range of goods tax-free the other way.

But regional trade officials have criticized the deal, saying it is potentially in breach of the Customs Union Protocol of the East African Community (EAC) of which Kenya is a signatory. Section 37 of the protocol states that an EAC member should inform its partners of any intention to offer preferential market access to a third-party since member states share a common Customs territory before such a deal is signed.

The Kenyan government has, however, denied the allegation. “The rules and guidelines of the EAC Customs Union Protocol require that we formally notify the EAC states of our intentions. There hasn’t been any signing of a trade deal. We will notify the EAC once the deal is in place,” said Peter Munya, Kenya’s former Trade Cabinet Secretary.

Moreover, Kenya is looking for another route to access the U.S. market, which accounts for up to 10 percent of its export basket, Munya explained, after Washington said it would not be renewing the AGOA deal following previous extensions. “Agoa is the only route for Kenyan goods to access the U.S. market duty-free and once it is out of place, it is Kenya that is going to suffer as the other EAC partner States operate under the Least Developed Countries framework,” the ex-trade official said.

Beyond the region, the proposed trade agreement between Kenya and the U.S., both of which share around $1 billion in trade annually, is against the African Continental Free Trade Area (AfCFTA), which, once in force from July 1, prohibits bilateral free trade negotiations with third parties.

“Under the AU, the African heads of state have discouraged member States from entering into bilateral free trade negotiations with third parties because they jeopardize the AfCFTA,” Erastus Mwencha, former deputy chairperson of the African Union Commission, was quoted as saying by The EastAfrican.

Mwencha, also the first Secretary-General of regional bloc COMESA, cautioned that the U.S. decision to adopt a bilateral approach on trade pacts would put developing countries such as Kenya at a disadvantage.

Under AGOA, the U.S. recorded $40.9 billion in total goods traded with sub-Saharan African countries in 2018 – goods exports totalled $15.8 billion while imports were valued at $25.1 billion. This puts the SSA trade surplus with America at around $9.3 billion for the year. But despite the surplus being widely in favour of the region, most exports to the U.S. are in oil or petroleum-based products, not the manufactured goods that provide a value-added boost to local economies.

“We would have expected that Kenya renegotiates for another trade pact as a bloc,” Mwencha said. “Our trade with the U.S. is very small. It is, therefore, better to negotiate as a bloc to maximize on the economies of scale. It will be in the interest of the U.S. to engage Africa under the WTO for purposes of protecting our economies from being bullied because if Kenya negotiates with the U.S., it will come with a sledge hammer … There is no way we can see Kenya export manufactured goods to the U.S. market.”

Mwencha added that Kenya is likely to benefit more from the establishment of a Customs Union under the AfCFTA as well as Protocols on trade in goods and services, which guarantee the most favoured nation treatment of each country in the agreement, compared with an FTA with the U.S.

But Munya, in an attempt to tone down criticism against Kenya, pointed to the lengthy process Nairobi still has to go through before the trade agreement could be signed or realized. “The deal requires many months of negotiations because the U.S. Congress is yet to debate and approve it. It is only when it does that we can begin to talk about an FTA,” he said.