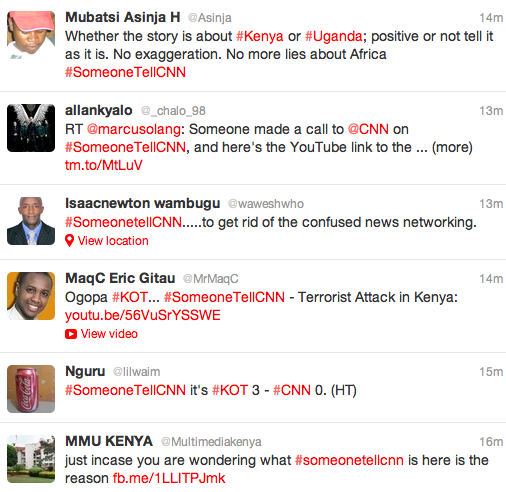 If you are online right now and you are wondering what #SomeoneTellCNN is all about, here is a good place to start.

CNN reported that there was violence in Kenya, an exaggerated coverage of the Nairobi grenade blasts that occurred yesterday. Instead of keeping mum, social media enthusiasts who felt insulted by the report took it upon themselves to point out CNN’s erroneous and misleading report.

Here is how The Nation reports the reaction:

“Kenyans on the micro-blogging sites, Twitter and Facebook, on Sunday criticised the global television network for depicting the Nairobi grenade blasts as an eruption of “violence” in the country…The Twitter offensive, gained momentum with hash-tags (keywords used to follow conversations on the platform)#SomeoneTellCNN and #CNNApologisegaining popularity.

Beyond Social Media brouhaha, someone took it a step futher to call CNN, demanding for an official apology. Here is a Youtube video record of the telephone conversation between the caller and a CNN staff:

Africans all over are united over this… And the #SomeoneTellCNN hashtag is still trending: